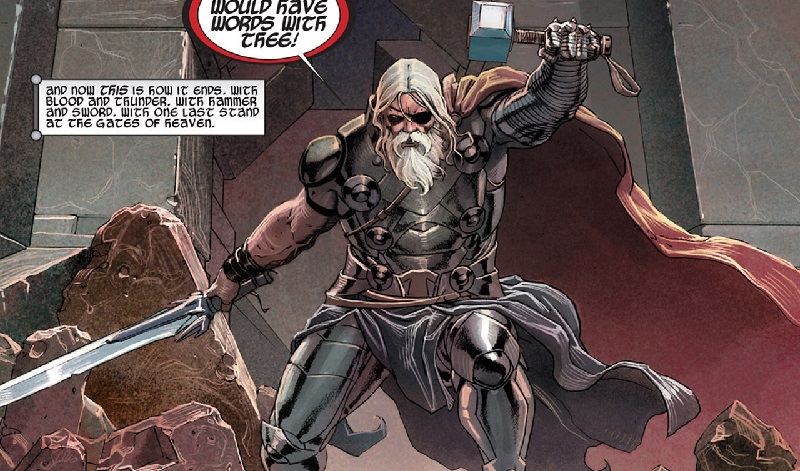 Thor is one of the most popular and powerful characters from the Marvel comics. And thanks to MCU, fans’ love for the character just keeps increasing.

Over the years, Thor has been featured in numerous storylines with numerous versions of him appearing across various Universes. One such version is Old King Thor.

Today, I will discuss the full origin and powers of Old king Thor. Many consider him to be one of, if not the most powerful version of Thor.

And I am here to explain his character in detail and see how much truth that statement holds. So, let’s start with a short and precise summary that sums up who Old king Thor is:

Old King Thor is from Earth-14412. His backstory is similar to Thor of Earth-616. But this Thor exists in the far future and is stated to be far older than any god who has ever lived. He inherits the power of All-Father and becomes the true king of Asgard.

So this was just short info about Old King Thor. I am gonna break down this character in more detail in the forthcoming sections.

So we don’t know much about him. But he did have brief appearances here and there and I’m gonna discuss his journey in brief which we have got in the comics.

First of all, regarding his origin, King Thor is from Earth-14412. His backstory is similar to that of Thor from Earth-616, which we are all familiar with.

But this version of Thor exists in the far future where everything is falling apart. He is millions of years old, stated to be far older than any God. He has inherited the power of All-Father from Odin, known as Odin Force.

Which he later renames Thor-Force. I have already talked about Odin Force in my article on Rune King Thor. Make sure to check that out as well. In Brief, Odin Force is a mystical, really powerful infinite source of energy used by the Kings of Asgard.

King Thor becomes the true King of Asgard. He looks like Odin, as he only has one eye. He also lost his left arm which is then replaced by Destroyer armor. King Thor also has the character of Odin most notably his bitterness and cynicism.

Old King Thor is supposed to be the future of Prime Thor from Earth-616. Here are some of his notable alias: All-Father Thor, King Thor, King Phoenix Thor, All Black the All-Father.

King Thor got the name, King Phoenix Thor, when he got Phoenix Force which we are all familiar with thanks to Jean Grey’s Dark Phoenix. We’ll also see how and when Thor gets Phoenix Force in the forthcoming sections.

For those who don’t know about Phoenix Force. It is one of the oldest known cosmic entities that represent the forces of creation and destruction and represents a life that hasn’t been born yet.

With Phoenix Force, Old King Thor is essentially immortal as Phoenix Force will resurrect him if he is killed. We’ll now discuss King Thor’s journey in the next sections.

Old King Thor’s life is filled up with many difficult challenges through and through. Sometime before Thor became the All-Father of Asgard, Loki attacks on Earth and successfully destroys it.

King Thor then goes for revenge as Loki kills everyone he loved. Loki also raises the corpses of dead Avengers as an army of the dead to fight Thor off.

And as Thor is busy fighting them, Loki escapes into the past to corrupt the Thor of the present. This incident is what made Thor a cynical and bitter king just like his father.

Not long after this, Gorr the God Butcher attacks Asgard with an army of Black Berserkers, killing or capturing its inhabitants. He levels the Asgard to the ground, completely demolishing it.

While Gorr spares King Thor’s life, it isn’t for good reasons he takes him as his prisoner and tortures him in the ruins of Asgard. Where he kept him to look back on his failures.

It wasn’t until 900 years later when he was finally liberated as Present/Prime Thor pursues Gorr and time travels into the future. See, Gorr also fled his present that’s why Thor is on his tail now.

King Thor, Prime Thor, and a Thor from the 9th century AD fights Gorr together and defeat him and hence save the surviving Asgardians and other Gods.

Sometime later, Galactus returns to consume what is left of Earth. King Thor tries to fight him off as he is emotionally attached to Earth. But he is blasted off by Galactus easily.

King Thor then returns with an All-Black the Necrosword which he casts from the black hole after Gorr’s defeat. He defeats Galactus but lets him live and tells him to eat Mars instead.

However, Galactus then taps on to the power of All-Black and begins his killing spree of devouring planets across the universe and emerges as Butcher of the Worlds.

King Thor’s blood that fell during the battle restores life on Earth. And Hence began his journey to restore Earth.

After a Millenium, King Thor along with his granddaughters Frig, Alti, and Ellisiv tries to repopulate Earth with flora and fauna.

Using some magical clay, a spell that is older than Odin, and single hair from Thor’s head conjure up and create different-different animals.

Since they didn’t know what life was like on Earth they created unique life including zebras with some wings, elephants with more than 2 horns, monkeys with spider-like limbs, flying sharks, and many more.

Thor himself creates two humans and names them, Jane and Steve. The human population then starts to regrow and flourish under his guidance.

As this story is way far into the future, The universe eventually starts to decline as it gets consumed by entropy. To check what’s happening Thor goes to the edge of the universe.

Where he gets confronted by Old Man Logan, who has Phoneix power. He is utterly furious at Thor as he has disrupted the natural order of the Universe. They even fight with each other.

Logan explains that his actions have attracted unwanted attention from Doctor Doom, who is much more powerful as he has Starbrand, the Spirit of Vengeance, Iron Fist and is also the Sorcerer Supreme.

Doom returns to Earth to conquer it. Both Old King Thor and Old Man Phoenix fight him but they are no match for Doctor Doom. Eventually, Wolverine sacrifices himself by giving up Phoenix Force, which then fuses with Mjolnir.

This is where Thor gains the power of Phoenix Force and hence emerges as King Phoenix Thor. He then fights with Doom in the Earth’s mantle and emerges victorious after 99 years. Due to this Thor collapses into Forever sleep to recover.

Related: God of Thunder vs Captain Marvel: Who would win?

Sometime later, Loki returns and attacks Asgard again. This time he has the All-Black the Necrosword and he wants to kill Thor. However, Loki is stabbed by Gorr, as his consciousness is still in the All-Black for all these years.

Thor and his granddaughters along with Loki try to fight off Gorr, but he has transcended immortality and has become one with the All-Black.

And it turns out that he is the one who is slowly devouring the universe as he is consistently spreading through it. All-Black takes over a massive black hole but King Thor finally defeats All-Black traveling to its center.

This destroyed All-Black and renders Gorr mortal with Amnesia. Later, Thor leaves Earth in the hands of his granddaughters and travels to Skidbladnir, the edge of the Universe where he waits for the inevitable entropy.

So, guys, this was the complete story of Old King Thor we know. If you liked this and want to read more about him in detail, here are some of the most notable reads:

Old King Thor has all the base abilities of Thor as well as many more. Here is the list of more powers he posses though this list while being huge still isn’t complete cause it can go on and on.

Let’s discuss some of the most notable buffs in brief:

1. Lightning Manipulation: While it’s obvious Thor can summon lightning with his Mjolnir. But King Thor can do that without Mjolnir something like we’ve seen in ‘Thor: Ragnarok’ but much more potent. He went toe-to-toe with Old Man Phoenix, Gorr The God Butcher, Loki with All-Black with his lightning bolts which he could summon with his body parts like the mouth.

2. Cosmic Awareness: He possesses vast knowledge about the cosmos and the Universe. He can find any cosmic being with his hammer. This is exactly how he was able to find Phoenix Wolverine.

3. Superhuman Physical Characteristic: This one’s a no-brainer. Even base Thor has superhuman strength, durability, agility, and speed. But what’s notable is he is evidently far superior to his younger self(s). He is even able to regenerate his organs. In King Thor #1 he generates chest and stomach organs.

4. Life Manipulation: As we’ve seen from his story how he repopulated earth with flora and fauna and even gave life to two humans.

5. Energy Manipulation: Old King Thor can use the energy of burning stars by absorbing them and channeling them through his Mjolnir.

6. Flight: While we all know how even base/prime Thor is capable of flight. King Thor takes it to next level as he could fly to the edge of the universe in no time. Like how he found Old Man Phoenix at the end of cosmos.

Some feats of Old King Thor

Let’s check out some of the best feats Old King Thor/Phoenix King Thor achieve in his journey. Even though every incident of his life is truly a feat, I’m gonna discuss some of the most notable ones:

In Thor: God of Thunder #9, as I explained earlier, Prime Thor came to the future to pursue Gorr who fled his present. Three Thors were fighting Gorr, Prime Thor, Thor from 9th century AD, and King Thor.

Old King Thor then punches Gorr, the God Butcher sending him lightyears away and then quickly follows him there. It’s stated for the first time in millennia the God Butcher experienced fear.

In Thor Vol. 5 #5, As I explained, When King Thor goes to the edge of the Universe to check on entropy he finds Old Man Phoenix, who was furious at Thor. They fight together and Old King Thor was able to endure Phoneix Logan’s attacks and claws who are hot enough to burn stars.

3. Hits Glactus in the chest

In Thor: God of Thunder #21, when Galactus came to eat what’s left of Earth and is confronted by King Thor, who fights with him toe-to-toe. He once punched Galactus in the chest hard enough to make him vomit. If you’re wondering what Galactus, a planet eater vomits, he discharges the molten energies of a thousand words.

In Thor Vol. 5 #6, As Phoenix King Thor he fights with Doctor Doom for 99 years in the Earth’s mantle. Generation would come and go by and not a day spent feeling the ground crumble nor a single night spent without hearing the screams from deep below.

So guys that’s a wrap for this article. I have covered a brief origin and journey of Old King Thor’s powers, abilities, and some of his notable feats. Hope you guys liked the article.

Hopefully, we’ll someday get to see him make it to the big screen. Anyways let me know what are your thoughts about him in the comment section down below.