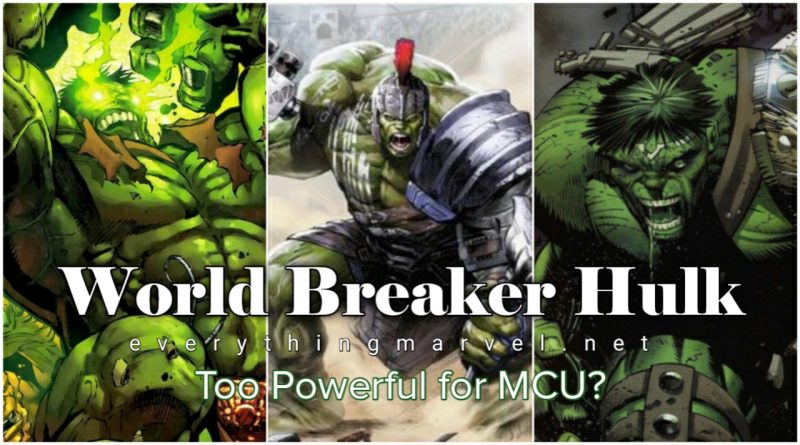 Hulk is one of the most popular characters from Comics World. And over the years, he has been featured in numerous storylines with numerous versions of him. One such storyline is World War Hulk where he emerges as World Breaker Hulk which is regarded as the most powerful version of Hulk to ever exist.

And today, I am going to discuss World Breaker Hulk in detail. We’ll discuss his origin, powers and abilities, and some of his feats. So, without wasting time let’s get started:

But first, let’s start with a precise summary of how Hulk became World Breaker Hulk in the World War Hulk storyline:

Hulk was blasted off into space by Illuminati and crashed on Sakaar. Years Later, the Illuminati ship he crashed in exploded destroying the planet and killing most of his friends and Wife. This leads to Hulk absorbing the powerful radiation flowing through planet Sakaar and hence emerging as World Breaker Hulk.

So, that was a brief intro to the origin of World Breaker Hulk. However, there is much more to the story and I’ll discuss all of that in detail in the forthcoming sections.

Related: Hulk vs Wolverine: Who wins the battle of powerhouse? Find out in the in-depth article.

It all started before the events of World War Hulk in the Planet Hulk storyline, where the Illuminati decided that Hulk was a huge threat to humanity.

The Illuminati is a team of heroes including Iron Man, Professor X, Black Bolt, Namor, and Dr. Strange. They held a private meeting to discuss certain prejudicial steps they could take in advance to avoid certain world-threatening worst-case scenarios.

Illuminati Blasts off Hulk into Space

One of the problems they were deeply concerned about was Hulk. Even though Banner was their crucial ally and a dear friend to some of them.

But Let’s face it, Hulk was a real threat who time and time again has proven difficult to control. He had killed hundreds of people in past and can do the same again any time. And it’s only a matter of time before he leveled a city or two.

Illuminati tried everything from reasoning with bruce, encouraging him to take up meditation, to deal with him with force, and even caging him in but none of it seemed to work.

Finally, Illuminati decided to make him someone else’s problem and sends him off into space and wished him luck.

Check out: Who is The Most Powerful Version of Thor?

After being sent off into space, Hulk’s ship was knocked off course, and crash-landed on Sakaar instead. Sakaar was a Gladiator-like society, so It was free real-estate for the Green Monster.

Jokes Apart! He was actually forced by the Planet’s tyrannical ruler, Red King to fight in gladiator battles for the entertainment of Sakaar’s people. He then starts fighting in battles just like what happened in ‘Thor: Ragnarok‘.

Eventually, Hulk forms up allies with other warriors who want to overthrow Red King. They eventually succeed in doing so and Hulk becomes the new ruler of Sakaar. He then marries Caiera, who gives birth to two children.

When Hulk finally found peace on the Planet Sakaar a tragedy happened. The warp core of the Illuminati ship he landed in exploded and destroyed the planet and the people including his pregnant wife and children.

Due to this incident, Hulk absorbed the radiation of the whole planet including the Old Power, flowing through the planet which Caiera could channel to enhance her powers. This enraged Hulk to a level never seen before.

Hulk then vowed to seek revenge on Heroes of Earth blaming them for what happened to his family and planet. This is what the World War Hulk storyline covers. Hulk first goes to Charles Xavier who was absent during the decision to send him off-planet. Xavier tells Hulk that he would have voted for the same.

Hulk then fights and defeats several X-men teams but leaves after learning about M-Day as Charles has already suffered a lot. He then goes to Manhattan and defeats many heroes like New Avengers, the Mighty Avengers, Doc Samsons, Fantastic Four, Black Panther, Storm, and Iron Man destroying the Stark Tower in the Process.

He doesn’t stop here and keeps fighting and defeating more heroes. This was just a brief of the havoc he created when he returned to Earth. If you’re interested in this storyline you can collect World War Hulk #1-5 from Amazon (both digital & paperback available).

Also, it’s worth noting that only Namor was the sole member of the Illuminati who voted against sending Hulk off-planet, as he predicted that he would eventually come for his vengeance. And as a result, he was saved from Hulk’s wrath.

World Breaker Hulk retains all the powers of the Normal Hulk/The Incredible Hulk such as:

Along with these he also possesses extra powers such as:

1. Intelligence: When Hulk became World Breaker Hulk even Banner agreed with him to form a pact to seek revenge from Illuminati this leads to Hulk becoming intelligent not Banner-level intellect but above average Human intellect.

2. Limitless Stamina: While Normal Hulk’s stamina is already immense and superhuman, World Breaker Hulk’s is next level as seen in the World War Hulk storyline itself that he shows no signs of fatigue even after fighting non-stop with many heroes.

3. Expert-Tactician: Thanks to his increased intelligence, Hulk can now form strategies/planing at the same level as Bruce Banner. He is capable of devising the most complex strategies with ease, something that normal Hulk cannot possibly imagine.

4. Control: He has remarkable control over his power. That’s something that makes World Breaker Hulk even more dangerous cause he can now channel his power and use it where it is truly required. But with this control, he has done good deeds as well.

5. Traversing Mindscape: He is able to traverse the mindscape. He is the only version of Hulk that is capable to do so. World Breaker Hulk can maintain the conscience inside Bruce’s Mindscape as well.

Some Feats of World Breaker Hulk

In the Incredible Hulk #632, it is established that World Breaker Hulk can shake and possibly destroy worlds by just being there as he constantly emits radiation which he gained by just existing. Below are some of the many Incredible feats he has achieved:

In World War Hulk #6, Hulk Takes just one step, unintentionally, not stomping, not trying to kick anyone and it causes an earthquake that shakes the entire eastern seaboard and almost destroys it.

And it’s been stated that two more of his steps would be have been enough to destroy the whole Eastern Seaboard. The fact that he wasn’t even trying is truly terrifying.

In The Incredible Hulk #633, Hulk sends Fin Fang Foom Flying with his Thunderclap. Which turns him into a projectile that shatters a barrier capable of withstanding the Mindless Ones, a race of extra-dimensional creatures capable of firing energy blasts.

3. Destroys a Planet in Dark Dimension

And their attack created shockwaves which vaporized nearby by A-tiers like Bi-Beast, Wendigo, etc. You can see the same in the above image.

This one is more of durability feats rather than strength. In The Incredible Hulk #635, Hulk takes 5 gamma bombs straight to his face from Fin Fang Foom which he gobbled earlier. But it only makes him stronger as he absorbs the radiation from those bombs.

So, guys, that’s a wrap for this article. World Breaker Hulk is truly a terrifying version of Hulk, which most people would agree to be the most powerful version of Hulk ever.

Some even argue that he is way too powerful to ever be explored in the MCU. But I think he can surely come to the MCU provided that the circumstances and the world-building is done right. Anyways, let me know what do you guys think about this version of Hulk in the comment section down below.