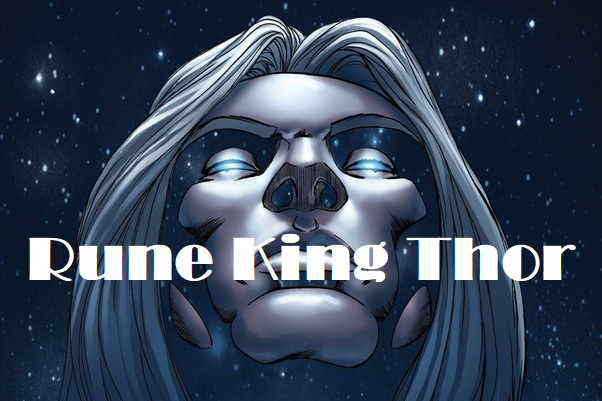 There have been a lot of versions of Thor in Marvel Comics Universe. For example, Phoenix king Thor, Ultimate Thor, Unworthy Thor, Thor Odinson. But most notably two of the strongest versions of Thor are Old king Thor and Rune king Thor.

And today we’ll discuss the full origin and powers of Rune King Thor. It’s probably the most powerful version of Thor. Some even say that he is way too powerful to ever be explored in the MCU.

Here is a summary that perfectly sums up who Rune King Thor is:

Thor goes on a journey of sacrifice to gain the knowledge of the past and ancient runes to prevent the Ragnarök cycle and Hence emerges as Rune King Thor, an all-powerful version of Thor who can wield Odinforce and Rune magic.

Let’s break down this character and see how true those statements are. But before that, you must know the following terms:

This is the story of Ragnarök and now that we’ve also seen Ragnarök happen in the MCU it will be quite easy to understand. However, it is quite different in the comics.

It happens as follows: As Odin is already dead by now. So Loki set in motion a series of events that ultimately leads to the end of Asgard i.e., Ragnarök.

Loki has formed allies and created an army for his evil deeds that even includes his children. He even forged a new Mjolnir with the help of Surtur. And that too with the same mold used by the dwarves for the original one.

So he fought with Thor and other allies of Asgard and Thor was utterly destroyed along with his Mjolnir. Loki then attempts to kill Thor, but he called upon Avengers and survives.

Now they again fight with Loki but unfortunately, Balder dies in this clash. After witnessing the balder’s death, Thor orders the Avengers to protect Earth.

Loki and his army killed many and left others to die. No matter who Thor found and formed allies with, Loki always comes out on the top.

When they arrived at Vanaheim, they were already under attack from Loki’s forces, including Fenris, who has grown stronger.

After that, a lot happens with Thor mostly bad he kills Durrok the Destroyer. Even Beta Ray bills join him and help Asgardians but nothing works out in his favor.

Then finally Thor decides that he must seek the wisdom of Odin. So he went on a quest to possess ancient Rune and their magic. But it wasn’t that easy as he thought.

Related: Cosmic Spider-Man: Too Powerful for the MCU? Find out in this in-depth article.

At Hildstalf, Thor meets with the Odinforce in the form of a boy. It also revealed why it abandoned Thor. It showed him how Odin became a true god.

But it was not enough as Odin has already done that. So he gave up another one. And then Thor drank from the Well of Mimir. Which granted him the power to see through the past.

He could vividly see the past of the gods. Thor then saw past and Ragnarök and realized that it’s a cycle that repeats itself. However, he still didn’t have the Rune Magic and needed more knowledge.

So he hung himself on Yggdrasil (also known as the Tree of the World), that’s what Odin also did. But Odin hung to the brink of death while Thor dies, literally.

After that he meets with Hela in the Hel, she is the ruler of hel. However, Thor defied death and asked for help from Odin. So with the help of Odin’s spirit, he escaped help.

Find out: Who is the Most Powerful Version of Hulk?

Those Who Sit Above in Shadow

Thor then meets up with Those Who Sit Above in Shadow. They were really powerful, and are considered gods to the Norse gods. They lived off the energy released by Ragnarök and were responsible for the cycles.

However, Now Thor knows everything about them. So he was gonna end this cycle. But those mysterious beings said that they know every possible outcome of past, present, and future.

But Thor said, “This time it’s different my father saw a way to hide me from your manipulation” Because he lived life as a normal being he is more powerful than anyone else.

So he just escapes from there and teleports with Rune Magic and is reborn as Rune King Thor. Now he has Odin force and Rune Magic with him.

So if you enjoyed this summary of his origin. I would advise you to read this storyline. You can Buy Avengers Disassembled: Thor from Amazon (both digital/paperback available).

But if you still haven’t started with the Marvel comics, then what are you waiting for? Just get started with Marvel’s fresh start storyline. I’ve written an in-depth guide and reading order for beginners.

Here is the complete list of powers and abilities of Rune King Thor:

Related: In-depth comparison between Stormbreaker and Mjolnir: Which Thor’s weapon is more powerful find out in this article.

Though this version of Thor is way too powerful, he still has his weaknesses and Limitations. So here are some of the weaknesses of Rune king Thor:

Some feats of Rune King Thor

These are some of the feats that Thor achieved with his new power along with Odinforce and Rune Magic. So here’s what he does next to stop the Ragnarök cycle.

This was the first feat of Rune King Thor. When he teleported to Valhalla, the first monster that attacked him was Mangog, a being with the strength of a billion souls.

Thor stops him with his one bare arm, An Odin-level beast with his one arm. He then erased him from existence effortlessly.

But it’s been said that Loki siphoned Mangog’s power, though it’s uncertain how much he took away. Still, it’s safe to say he was weaker than before.

Later, Loki reveals to Thor that he is Asgard now! Implying that he is much more powerful than before. Little did he know about his brother. Thor turned Uru metal weapons into wooden clubs.

He destroyed Valhalla, killed Loki’s army, and defeats the God of Mischief. Thor proceeds to separate Loki’s head from his body. But still keeps him alive.

Note at this point Thor became so powerful and even Odinforce couldn’t even guess what was going on in his mind. Then Thor travels to Muspelheim to ask Surtur to reforge Mjolnir.

However, it’s noted that he could do it by himself. But it’s just ironic how Asgard’s greatest enemy is going to restore the gods’ greatest weapon.

He then tears dimensional barriers with a single blast, creating a path from Muspelheim to Valhalla and Vanaheim.

Thor’s main motive now was to somehow stop the Ragnarök cycle. And so begins the battle of Ragnarök.

First of all, he transports Beta Ray Bill away. He then talks with him via Telepathy and explains to Beta that he can not let him die with his people.

As he has done so much for Asgard and he requests that he must preserve them in the form of memories.

After taking down the ruins of Asgard, Thor soon teleports to Yggdrasil to end the Ragnarök Cycle. Thor meets with The Norns, female beings who rule the destiny of gods and men.

The Norns explain to him that he can’t destroy the fate that is already woven. But he identifies how he can end the Ragnarök Cycle. There’s a tapestry that stores everyone’s fate, the past, and the future. Here is an image for that:

Those Who Sit Above In Shadow offered him to join them as he knows how to end them. But Thor refused their proposal and destroyed the Tapestry of Fate, ending the Ragnarök Cycle.

This also means the end of Yggdrasil, the World Tree. Odinforce compliments his decision.

And Later it was revealed that Those Who Sit Above in Shadow were celestial beings who lived off the great energies generated by the lives of Norse gods. With each cycle, they would feed: Each Ragnarök gave them sustenance, gave them life.

By destroying them, Thor has returned honor to his people. Thor then falls into the Thorsleep. Now He has become one with the universe and resting. For a while, at least.

So, guys, this was the origin story of Rune King Thor along with his powers and abilities. Not to forget some of his top feats.

One thing we should also note here is that After this event this version of Thor never appeared in the marvel comics. Probably because he was way too powerful even for the comics.

What do you guys think about him, is he too powerful for the MCU? For me, I believe yes, he is really powerful for the movies. But I think Marvel can still pull this off if they build certain circumstances to support this story.

Anyways let me know what do you guys think about this in the comment section below.