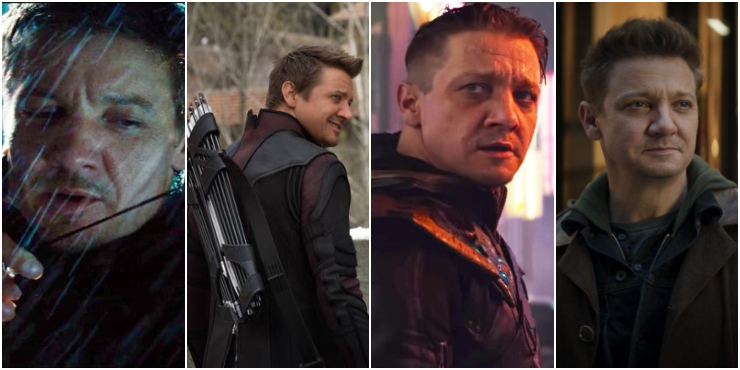 Clint Barton is finally getting the recognition he deserves in the MCU with his Disney+ Show. And here I am today looking back at the top quotes of Hawkeye from his MCU journey so far.

He was often overlooked by the fan and even the MCU themselves. Though he was developed really good especially I loved the way MCU humanized him by giving him a family.

But limited screen time is what took away from giving the extra depth to his character. Some people actually called him the useless Avengers which is objectively wrong.

Hopefully, MCU fans are gonna respect him more after this show. So without any further delay let’s get started and check out the best Hawkeye quotes:

I’m gonna divide this article according to Marvel’s Phases. So let’s first talk about MCU Phase 1 where Clint appeared in Thor and The Avengers and check out his best quotes from these movies:

1. “Do you want me to take him down, or would you rather send in more guys for him to beat up?” — Clint Barton

2. “You better call it Coulson, ’cause I’m starting to root for this guy.” — Clint Barton

3. Natasha Romanoff: This is just like Budapest all over again.
Clint Barton: You and I remember Budapest very differently.

4. Thor: I have unfinished business with Loki.
Clint Barton: Yeah? Get in line.

5. Tony Stark: What else you got?
Clint Barton: Well, Thor’s taking on a squadron down on Sixth.
Tony Stark: And he didn’t invite me…

6. “Sir, Director Fury is stalling. This place is about to blow and drop a hundred feet of rock on us. He means to bury us.” — Hawkeye

7. “You don’t understand. Have you ever had someone take your brain and play? Take you out and stuff something else in? You know what it’s like to be unmade?” — Clint Barton

8. Steve Rogers: You think you can hold them off?
Clint Barton: Captain, it would be my genuine pleasure.

10. Clint Barton: Stark? Got a lot of strays sniffing your tail.
Tony Stark: Just trying to keep them off the streets.
Clint Barton: Well, they can’t bank worth a damn. Find a tight corner.
Tony Stark: I will roger that.

11. Loki: I know. What did it show you, Agent Barton?
Clint Barton: My next target.
Loki: Tell me what you need.
Clint Barton: I’ll need a distraction. And an eyeball.

Checkout: How did Hawkeye become deaf?

Now let’s head on to Marvel’s Phase 2. Clint only appeared in Avengers: Age of Ultron in Phase 2. So let’s check out Hawkeye’s best quotes from Age of Ultron:

12. “(After taking out Wanda) Already tried the mind-control thing, not a fan!” — Hawkeye

13. Clint Barton: “Whosoever, be he worthy, shall have the power”, whatever man! It’s a trick!
Thor: It is more than that, my friend!

14. Laura: I see you with the Avengers, and, well…
Clint Barton: You don’t think they need me?
Laura: Actually, I think they do. They’re gods, and they need someone to keep them down to Earth.

15. Tony Stark: Yeah, we would have called ahead, but we were busy having no idea that you existed.
Clint Barton: Yeah, well Fury helped me set this up when I joined. He kept it off SHIELD’s files, I’d like to keep it that way. I figure it’s a good place to lay low.

16. Wanda Maximoff: I looked in your head and saw annihilation.
Vision: Look again.
Clint Barton: Yeah. Her seal of approval means jack to me.

18. Tony Stark: All deference to the Man Who Wouldn’t Be King, but it’s rigged.
Clint Barton: You bet your ass!

19. Tony Stark: Natasha, I could really use a lullaby!
Clint Barton: That’s not going to happen. Not for a while. The whole team is down. You got no backup here.

20. Hawkeye: Nobody would know. Nobody. “The last I saw him, Ultron was sitting on him. Uh… yeah, he’ll be missed. That quick little bastard. I miss him already…”

22. “Hey, look at me. It’s your fault, it’s everyone’s fault, who cares. Are you up for this? Are you? Look, I just need to know cause the city is flying. Ok, look, the city is flying, we’re fighting an army of robots, and I have a bow and arrow. None of this makes sense. But I’m going back out there cause it’s my job. Ok, and I can’t do my job and babysit. Doesn’t matter what you did, or what you were. If you go out there, you fight and you fight to kill. Stay in here, you’re good. I’ll send your brother to come find you. But if you step out that door, you are an Avenger. All right, good chat.” — Hawkeye

Clint Barton appeared in Captain America: Civil War and Avengers: Endgame in MCU Phase 3. He missed Avengers: Infinity War as he was under house arrest after the events of Civil War. So let’s check out his quotes from Phase 3:

24. Black Widow: Are we still friends?
Hawkeye: That depends on how hard you hit me.

25. Hawkeye: Okay, we gotta go. It’s this way.
Wanda Maximoff: I’ve caused enough problems.
Hawkeye: You gotta help me, Wanda. Look, you wanna mope, can go to high school. You wanna make amends, you get off your @ss.

26. “The futurist is here, gentlemen! He sees all. He knows what’s best for you, whether you like it or not.” — Clint Barton

27. Clint Barton: (about Stark) You gotta watch your back with this guy! There’s a chance he’s gonna break it!

28. Wanda Maximoff: Oh, my god! What are you doing here?
Clint Barton: Disappointing my kids. I’m supposed to go waterskiing. Cap needs our help. Come on.

29. Iron Man: Clearly retirement doesn’t suit you. Get tired of playing golf?
Hawkeye: Well, I played 18, I shot 18. Just can’t seem to miss.
Iron Man: First time for everything.
Hawkeye: Made you look.

34. “Under different circumstances, this would be totally awesome.” — Clint Barton

37. ” (teaching his daughter archery) You see where you’re going. Now let’s worry about how you get there.” — Clint Barton

38. Akihiko: (in Japanese) Why are you doing this? We never did anything to you.
Clint Barton: (in Japanese) You survived. Half the planet didn’t. They got Thanos. You get me.

39. Akihiko: Wait! Help me. I’ll give you anything. What do you want?
Clint Barton: What I want, you can’t give me.

42. Clint Barton: Tell my family I love them.
Natasha Romanoff: Tell them yourself.

43. “Yeah, look, I know I’m way outside my pay rate here, but she’s still dead, isn’t she? It can’t be undone! Or, at least that’s what the red floating guy had to say! Maybe you ought to go talk to him! Okay, go grab your hammer, and you find and talk to him! It was supposed to be me. Sacrificed her life for that goddamned stone, she put her life on it.” — Clint Barton

44. Clint Barton: You know I wish there was a way that I could let her know. That we won, we did it.
Wanda Maximoff: She knows… They both do.

Find out: Why does Hawkeye never miss?

Now let’s move onto Phase 4 and beyond. Currently, Hawkeye only appeared in his own show of the same name. So here are Hawkeye’s best quotes from his show:

45. Clint Barton: So where’d you learn to fight?
Kate Bishop: I, uh, started taking martial arts when I was five.
Clint Barton: Wow. So, like, a year ago?

46. Clint Barton: Look, I gotta find a place to stash you. Safe. So I can recover the suit and clean your mess.
Kate Bishop: Stash me? I’m not a bag of money.
Clint Barton: No, you’re not. A bag of money would be useful to me.

47. Hawkeye: Since when did everybody start saying, “I love you,” to everybody all the time?
Kate: That was my mom. Since when did your heart shrink three sizes?
Hawkeye: When a little girl in a ninja costume stole my Christmas.

49. Kate Bishop: I’m gonna be late, thanks to you.
Clint Barton: You’re gonna be alive ’cause of me.

50. Kate: Hey, look, that one’s you.
Clint Barton: No. That’s Katniss Everdeen.
Kate: Your problem is Branding.
Clint: No, my problem is you. And this ninja suit and the people are trying to kill you because of it. The whole thing’s a problem that I’m gonna solve today, so I can go to my family.
Kate: No, it’s branding.

54. Maya: (in sign language) You rely too much on Technology.
Clint: Well, my go-to weapon is two sticks and a string, so…

55. “Now the suit. She put it on by accident. She did not know what it means. She’s not Ronin. Look at her. She’s nine. And spoiled rotten.” — Hawkeye

56. “Listen to me know’s not the time to get scared. We’re gonna get out of this. You go back to living your life, I’ll go back to my family. You’re gonna harness that over-confidence of yours, okay? This ridiculous over-confidence, you remember that one?” — Hawkeye

57. “(to Kate Bishop) You’re not wrong… call yourself one of the world’s greatest archers.” — Clint Barton

58. Kate: Look, I know this may sound weird, but I’ve dreamed of this for as long as I can remember. My dad was fearless. And his whole life was about helping people. When I put that suit on, I thought, “This is it. This is the moment I become who I am supposed to be.”
Clint: I remember the day I thought the same thing. You know, it’s, uh… It comes with a price. This life you wanna live. To really help people. I mean, try to help people, anyway. Comes with a lot of sacrifices. And some things you’ll lose forever.

59. Kate: You need a more recognizable costume.
Clint: You realize that my job for the last 20 years was to be not recognizable, right?

60. “There’re several reasons why I’d never wear a flashy costume. My job is to be, number one, a ghost. Numer two, my wife would divorce me if I put something like this on. And number three, uh… I’m not a role model. I’m sorry, Kate. I’m not a role model to anyone. Never have been.” — Clint Barton

This section will be updated as Clint Barton aka Hawkeye continues his journey.

Until then it’s a wrap for this article. These were some of the best quotes of Hawkeye from his MCU journey. Hope you guys liked this article. Feel free to share your thoughts in the comment section below.