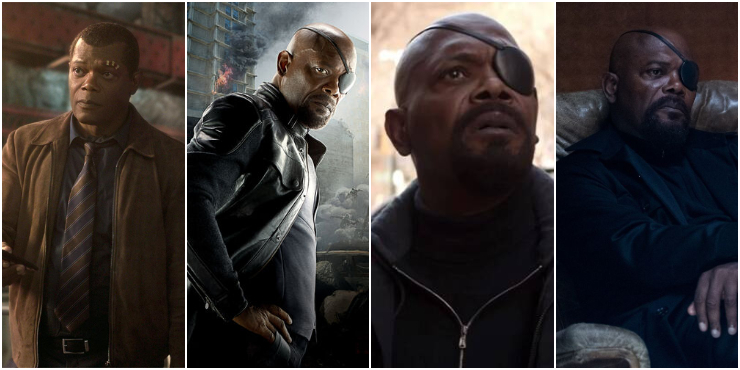 Hello everyone, I’m back again with yet another article in the Marvel Quotes series. And Today, we’ll check out the best Nick Fury quotes from his MCU Journey till now.

Nick Fury is the man who founded the Avengers Initiative. He is played by Samuel L. Jackson in the Marvel Cinematic Universe. In fact, Marvel drew Nick Fury based on Samuel in the Ultimate Comics version.

So this was all a part of their plan so they could cast him in the movies. And now, it seems like no one else could play this character better than him.

Hence here I am sharing with you guys the best quotes of Nick Fury which perfectly reflects his character’s bossiness as well as his leadership.

1. Nick Fury: “I am Iron Man”. You think you’re the only superhero in the world? Mr. Stark, you’ve become part of a bigger universe. You just don’t know it yet.

2. “I’m here to talk to you about the Avenger Initiative.” — Nick Fury

5. “What do we want from you? Uh-uh. What do you want from me? You have become a problem, a problem I have to deal with. Contrary to your belief, you are not the center of my universe. I have bigger problems in the southwest region to deal with.” — Nick Fury

8. Erik Selvig: So, you’re the man behind all this? It’s quite a labyrinth. I was thinking that you had taken me down here to kill me.
Nick Fury: I’ve been hearing about the New Mexico situation. Your work has impressed a lot of people who are much smarter than I am.

9. “Legend tells us one thing; History, another. But, every now and then, we find something that belongs to both.” — Nick Fury

10. Erik Selvig: (talking about tesseract) What is it?
Nick Fury: Power, Doctor. If we figure out how to tap it, maybe unlimited power.

I’m giving The Avengers movie a separate section because Fury had a Major role in this movie. He is truly the one who brought our heroes together. Hence he has a lot of quotes in this movie.

11. Nick Fury: At ease, soldier! Look, I’m sorry about that little show back there, but we thought it best to break it to you slowly.
Steve Rogers: Break what?
Nick Fury: You’ve been asleep, Cap. For almost 70 years.

12. “I recognize the council has made a decision, but given that it’s a stupid-ass decision, I’ve elected to ignore it.” — Nick Fury

13. Thor: I thought humans were more evolved than this.
Nick Fury: Excuse me, did WE come to YOUR planet and blow stuff up?

14. “We’ve made some mistakes along the way. Some, very recently.” — Nick Fury

15. “He’s called Loki. He’s not from around here. There’s a lot we’ll have to bring you up to speed on if you’re in. The world has gotten even stranger than you already know.” — Nick Fury

16. Steve Rogers: At this point, I doubt anything would surprise me.
Nick Fury: Ten bucks says you’re wrong.

18. Thor: Your work with the Tesseract is what drew Loki to it… and his allies. It is a signal to the Realm that Earth is ready for a higher form of war!
Nick Fury: Higher form? You forced our hand! We had to come up with some way that we could…
Tony Stark: A nuclear deterrent? Cause that always works well…
Nick Fury: Remind me how you made your fortune, Mr. Stark.

19. “Last year, Earth had a visit from another planet that had a grudge match that leveled a small town. We learned that only are we not alone, but we are hopelessly, hilariously outgunned.” — Nick Fury

21. “Until such time as the world ends, we will act as though it intends to spin on.” — Nick Fury

23. “How desperate am I? You threaten my world with war. You steal a force you can’t hope to control. You talk about peace and you kill ’cause it’s fun. You have made me VERY desperate. You might not be glad that you did.” — Nick Fury

25. “We’re dead in the air up here. Our communications, the location of the Cube, Banner, Thor… I got nothing for you. I lost my one good eye. Maybe I had that coming.” — Nick Fury

26. “There was an idea, Stark knows this, called the Avengers Initiative. The idea was to bring together a group of remarkable people to see if they could become something more. To see if they could work together when we needed them to, to fight the battles that we never could.” — Nick Fury

29. Sam Wilson: 41st floor! 41st!
Nick Fury: It’s not like they put the floor numbers on the outside of the building.

30. “I know you erased my password. Probably deleted my retinal scan. But if you want to stay ahead of me, Mr. Secretary… (removes his eyepatch) you need to keep both eyes open.” — Nick Fury

32. Steve Rogers: Those hostages could have died, Nick.
Nick Fury: I sent the greatest soldier in history to make sure that didn’t happen.

33. Steve Rogers: Soldiers trust each other. That’s what makes it an army. Not a bunch of guys running around shooting guns.
Nick Fury: Last time I trusted someone, I lost an eye.

Find out: How did Nick Fury lose his eye in comics?

34. Steve Rogers: I can’t lead a mission when the people I’m leading have missions of their own.
Nick Fury: It’s called compartmentalization. Nobody spills the secrets, because nobody knows them all.
Steve Rogers: Except you.
Nick Fury: You’re wrong about me. I do share. I’m nice like that.

35. “(while holding a photo of Alexander Pierce) This man declined the Nobel Peace Prize. He said that peace is not an achievement but a responsibility. It’s stuff like this that gives me trust issues.” — Nick Fury

37. “Tetradoxine B. Reduces the pulse to one heartbeat a minute. Banner made it for his stress-related issues. It didn’t go well for him, but we found uses for it.” — Nick Fury

38. Alexander Pierce: I work forty floors away and it takes a hijacking for you to visit?
Nick Fury: Well, a nuclear war would do it too.

40. (from the trailer)
“Here we all are, with nothing but our wit and our will to save the world! So stand and fight!” — Nick Fury

42. “You’ve come up with some pretty impressive inventions, Tony. War isn’t one of them.” — Nick Fury

43. (from the trailer)
Steve Rogers: Ultron’s calling us out. What are we gonna do?
Nick Fury: Something dramatic, I hope.

45. “The world adjusts, evolves to live with changes.” — Nick Fury

47. Steve Rogers: [relieved] Fury, you son of a bitch!
Nick Fury: Whoa ho ho! You kiss your mother with that mouth?

Now let’s move on to Phase 3. Nick Fury although appeared in 4 movies in Phase 3 he was only briefly in Infinity War and Endgame. So only Captain Marvel and Far From Home have notable quotes.

Also in Far From Home, Talos, Skrull took place of him, so technically these aren’t his quotes but still, I think he perfectly captured his personality and attitude. So I’m still gonna list those here:

49. “You know anything about a lady blowing up a Blockbuster? Witnesses say she was dressed for laser tag.” — Nick Fury

50. Carol Danvers: (talking about the S.H.I.E.L.D. logo) Does, uh, announcing your identity On clothing help with the covert part of your job?
Nick Fury: Said the space soldier who’s wearing a rubber suit.

53. “I know a renegade soldier when I see one. Never occurred to me that one might come from above.” — Nick Fury

56. “I’m about five seconds from complicating that wall with some ugly-ass Skrull brains.” — Nick Fury

58. Nick Fury: We have no idea what other intergalactic threats are out there. And our one-woman security force had a prior commitment on the other side of the universe. S.H.I.E.L.D. alone can’t protect us. We need to find more.
Agent Coulson: More weapons?
Nick Fury: More heroes.
Agent Coulson: You think you can find others like her?
Nick Fury: We found her and we weren’t even looking.

58. Agent Coulson: So is it true? That the Kree burned your eye out because you refused to give them the Tesseract?
Nick Fury: I will neither confirm nor deny the facts of that story.

59. Agent Coulson: So is it true? That the Kree burned your eye out because you refused to give them the Tesseract?
Nick Fury: I will neither confirm nor deny the facts of that story.

61. “Uneasy lies the head that wears the crown. Stark said you wouldn’t get that because it’s not a Star Wars reference.” — Nick Fury

62. “If another person touches that door, you and I will be attending another funeral.” — Nick Fury

63. “You got gifts, Parker. But you didn’t want to be here. I’d love to have you in Berlin, but you’ve got to decide whether you’re going to step up or not. Stark chose you. He made you an Avenger. I need that. The world needs that. Maybe Stark was wrong. The choice is yours.” — Nick Fury

That’s it for this article. These were some of the best quotes of Nick Fury so far from his MCU Journey. He’s also gonna be in MCU’s Phase 4 and it looks like he’ll have a big role in the Secret Invasion series.

So, I will update this article as his journey continues in the MCU. Anyways, I hope you guys liked these quotes. Feel free to share your thoughts about this in the comment section down below.