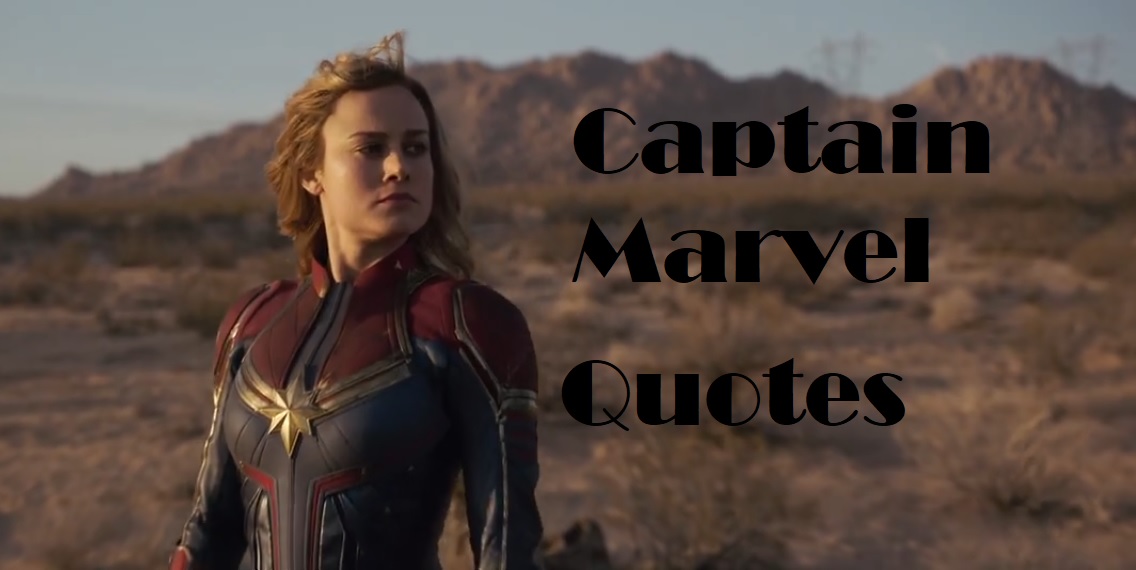 Captain Marvel movie gave us a lot of quotes and pretty powerful ones as well. Well, this is kinda expected from the MCU movies now.

I’m not a fan of this movie, frankly speaking, didn’t like it that much. But since we’re a part of a bigger universe. We have to accept the flaws as well and embrace them.

Today, I’m here with these favorite quotes from Carol Danvers aka Captain Marvel that I think reflects what real feminism is all about.

I strongly condemn most of the feminists out there or say pseudo-feminist, but that hinders the real feminist and their enormous work for the uplifting of women.

Feminism is all about women’s empowerment and equality among men and that should be both ways around. This movie is exactly about that, So here are my top favorites quotes from Carol.

This was a funny quote as Captain Marvel teased Nick fury a little bit. Earlier, Fury goes full ninja and unlocked the door by tracing the fingerprint on a tape of the S.H.I.E.L.D. agent who locked them.

But this time when he was flexing again Carol just blows the door out with her photos blast. And Nick fury was like “Am I a joke to you?” and why she just didn’t do that earlier. To which Carol replied, “I didn’t wanna steal your Thunder.”

This quote was shown to us (audience) as Carol’s flashback or when Talos when going through Captain Marvel’s vague memories. Both Maria and Carol were USAF pilot and at that time it was unorthodox to see women flying jet aircrafts.

But as I said this is called real women empowerment. As Maria said, “About to show these boys how we do it. You ready?” To which Carol replied, “Higher, further, faster, baby.”

3. “If there were lives at stake, I would fly the plane.”

When Carol was investigating her past life and trying to clear her vague memories, Maria tells her the about the day she met with the accident.

Maria explained to her that how that day Lawson (Mar-vell) was agitated and said she had many lives to save. Mar-vell was gonna take Asis up herself but you (Carol) said, “If there were lives at stake, I would fly the plane.“

At this point, Captain Marvel was getting her memory back. But nonetheless, this quote showed how she was inspired by Mar-vell and was ready to sacrifice herself to save other lives. Even way before she got her powers.

This also makes me remember another powerful quote, “Heroes are made by the path they choose, not the powers they are graced with.“

After finding out the truth about herself and the Kree carol was devastated. It seemed that her whole life was a lie. She used to believe that the Kree were a race of noble, warriors, heroes.

But now she knows how Yon-Rogg lied to her. So Talos then explains that Skrulls are looking for a new home and he tells that who are different then them.

This pissed her and She replied, “You don’t know me. You have no idea who I am. I don’t even know who I am!”

Clearly it was hard for her but then Maria consoles her as she explained to her, “You are the most powerful person I know. Way before you could shoot fire your fists.“

Related: Quotes from Thor that are as powerful as him

This quote is not from the movie but it was in the second Trailer for Captain Marvel. Nonetheless Maria does quote somewhat similar to this are follows:

“Lawson always told us that her work at Pegasus wasn’t to fight wars, but to end them.“

As carol is deeply inspired by Mar-vell this motive suits her as well. In fact, that’s what she’s gonna do in the sequel.

The Kree, Yon-Rogg and the Supreme Intelligence all of them were a lie to Carol. They were all depressing her from unleashing her real potential. She was told that the Kree were superior races.

And up to an extent they were successful in doing so but when she realized the truth about them she was no longer afraid of the so-called “race of nobles, warriors, heroes.”

So now when the Supreme Intelligence that without us you’re nothing just a normal human, that’s when she realized what she could achieve. Hence she replied, “You’re right. I’m only human.” This scene leads us to the next quote:

Related: Who is more Powerful: Thor or Captain Marvel? Find out what the stats say.

7. “I’ve been fighting with one arm tied behind my back.”

The Kree had her implanted with a chip through which they could control her power. But now since he released the truth about them and herself that she is just a human.

She just breaks it while quoting simultaneously “I’ve been fighting with one arm tied behind my back. But what happens when I’m finally set free?” Now she had unleashed her full power and goes into the Binary form.

Related: Check out what the stats say about a battle between Carol Danvers and Odinson Thor.

This is arguably one of the best quotes from Captain Marvel and personally my favorite. As the climax approaches and so is the death of Yon-Rogg. He now realizes that there is no way he could win against her.

So, he tries to trick Carol again as he used to do in the training. And he tries to play with her psychology. He baits her to get in a hand-to-hand fight and prove to him that she is more than just those photos blast.

But since Denvers is not what she used to be. You cannot trick her now. And additionally, she doesn’t really care about proving herself to anyone.

So just uses her photon blast and knocks him away while stating that “I have nothing to prove to you.“

9. “Tell the Supreme Intelligence that I’m coming to end it.”

Yon-Rogg must be a lucky fellow. Carol still doesn’t kill her but she has a motive behind that. Denver sents him back to Hala to give her message to Supreme Intelligence.

This message is as follows: “Tell the Supreme Intelligence that I’m coming to end it. The war, the lies, all of it.“

This is a great moment for her as earlier the supreme intelligence was controlling her but now she has decided to fight against them. As Mar-vell said, “this isn’t about fighting the wars this is about ending them.“

Many people underestimate this particular dialogue or scene from the movie. At the end of the film, Captain Marvel agrees to help Skrull find a new home. As she quotes, “I’ll help you find a home. Finish what Mar-Vell started.“

This scene perfectly setups another space adventure for Captain Marvel and the audience as well. That’s what I think we’re gonna explore in the sequel. And Ronan is probably gonna get in the way of her.

Because when captain marvel was destroying his ship right in front of he said to his fellow member that get back to the previous jump. We’ll be back for the weapon, and then the other “guy asks for the core?”

“No for the weapon” Ronan replied. So we’re going to see Ronan going after Captain Marvel. And I am optimistic enough to believe that we might see some Thanos influence in the next movie.

Anyways, these were some of the best quotes of Captain Marvel we go from his solo movie. We’ll update and add more of them when the next ones come. So keep checking this space and also let me know what’s your favorite one.