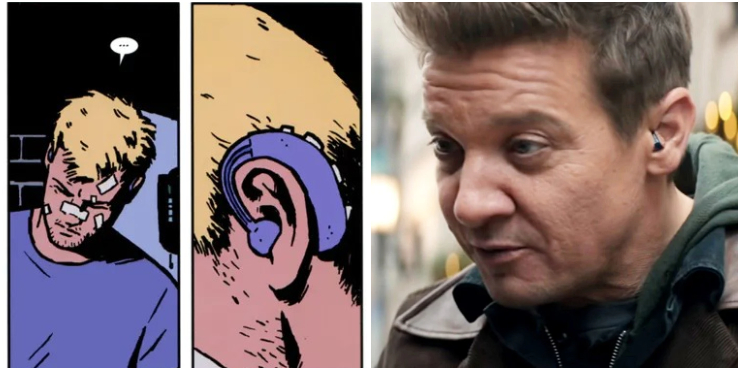 Hello everyone, I’m back again with another comic insight article. And today, I’m gonna talk about how did Hawkeye lose his hearing in the comics and its comparison with the MCU.

Clint Barton aka Hawkeye is finally getting the attention he deserved in the MCU thanks to the new Disney+ TV Series. In the series, he’s seen using hearing aids while the series does explain how he lost his hearing in the MCU.

However, many of you guys might be wondering how he went deaf in the comics. So, here I am with this article where we’re gonna find out exactly about that and compare it with the MCU.

So first let’s start with a short and precise answer:

In Comics, Clint & Mockingbird team up to defeat Crossfire, who’s built a sonic machine that brainwashes heroes into fighting each other. Hawkeye counters it by slipping a sonic arrowhead into his mouth which in turn makes him deaf. In MCU, Hawkeye lost his hearing due to repeated physical trauma on his Avengers missions.

So guys this was a brief summary of how hawkeye went dead in the comics and its comparison with the MCU. But there’s more to the story and I’m gonna discuss exactly that in a little bit more detail in the forthcoming sections.

How Clint Lost His Hearing In The MCU

First of all, let’s discuss how hawkeye lost his hearing in the MCU. In Episode 2 of Hawkeye Disney+ Series, Kate Bishop asks Clint what happened after seeing his hearing aid.

To which Clint replies, “Hard to tell.” But we do get the flashbacks where Hawkeye is seen in the middle of all the explosions he’s been in due to his Avengers Mission.

Implying he’s had physical damage and trauma due to which he’s lost his hearing. Although, it’s not yet explained how much of hearing he’s lost. But In Episode 3, Clint says “hard of hearing, not deaf”, which means he hasn’t lost his hearing completely.

How Hawkeye Went Deaf In The Comics

Now let’s check out how Clint Barton got his hearing aids in the MCU. There have been different runs in Comics and it differed how he lost his hearing in each of them. So I’m gonna discuss them in the next sections.

Hawkeye (1983) is a 4-issue miniseries. It features a Villain team-up called Death Throws. Crossfire was the leader of the team who plans to kill the Avengers, but his first target was Hawkeye.

As he plots the plan that he will get the other heroes when they gather together for Hawkeye’s funeral. So he built a supersonic machine that is capable of brainwashing people nearby and making them fight and kill each other.

At the end of the miniseries, Hawkeye and Mockingbird get captured by the Death Throws. Crossfire then turns on his brainwashing machine and both our heroes go insane and start to fight each other brutally.

Crossfire stops it for a bit to make our heroes realize what they are doing to each other. He then starts it again, however, when it was stopped Hawkeye manages to slip a sonic arrowhead into his mouth.

Hawkeye successfully nullifies the effects of the machine but unfortunately, it blasts his eardrums which in turn makes him deaf and he loses about 80% of his hearing. Later, it’s Mockingbird who helps him adjust to being deaf and gives him hearing aids.

Find out: Has Hawkeye ever missed?

Counter-Earth or Heroes Reborn is also known as Franklinverse. It follows after the deaths of the Fantastic Four, Avengers, and Doctor doom. They are reborn and certain aspects of their backstory are changed.

They are transported into a pocket universe created by Franklin Richards, who is the son of Mister Fantastic, and the Invisible Woman. He is near-omnipotent and has psionic abilities.

In fact, he’s one of the most powerful mutants. So after the creation of Franklinverse, when Hawkeye was reborn, he didn’t have any damage in his eardrums, and hence he wasn’t deaf anymore.

Now let’s talk about one of the best Hawkeye comic runs. Hawkeye (2012-2015), also known as Matt Fraction and Aja’s Run on which the Hawkeye Disney+ show is based.

In the Fraction’s run, Clown/Kazi stabs Hawkeye into both his ears with his own arrows causing damage to the middle and inner ears which then resulted in Clint losing most of his hearing.

He remained largely deaf in that run and used American Sign Language (ASL) and lip reading in order to understand others around him. He used normal speech to communicate with them. However, he later started using hearing aids created by Tony Stark.

There are also other versions where different writers used their own story as to how Clint went deaf.

For example, In 2014 comics, it was revealed that Clint as a child suffered abuse from his father which left him partially deaf. But it’s unclear whether it remained till his adulthood or not.

Similarly, In Hawkeye Vol 4, it’s revealed that his ears got damaged when a dude in clown facepaint attacked him on his apartment complex.

Since Matt Fraction’s run, other writers have been consistently portraying him as deaf or using their own version of how he lost his hearing because Fraction and Aja really set the tone for Hawkeye which gave him even more depth.

So guys this was the whole history about how Clint Barton aka Hawkeye went deaf in the comics and the MCU. Hope you guys got your answers. Feel free to share your thoughts in the comment section down below.