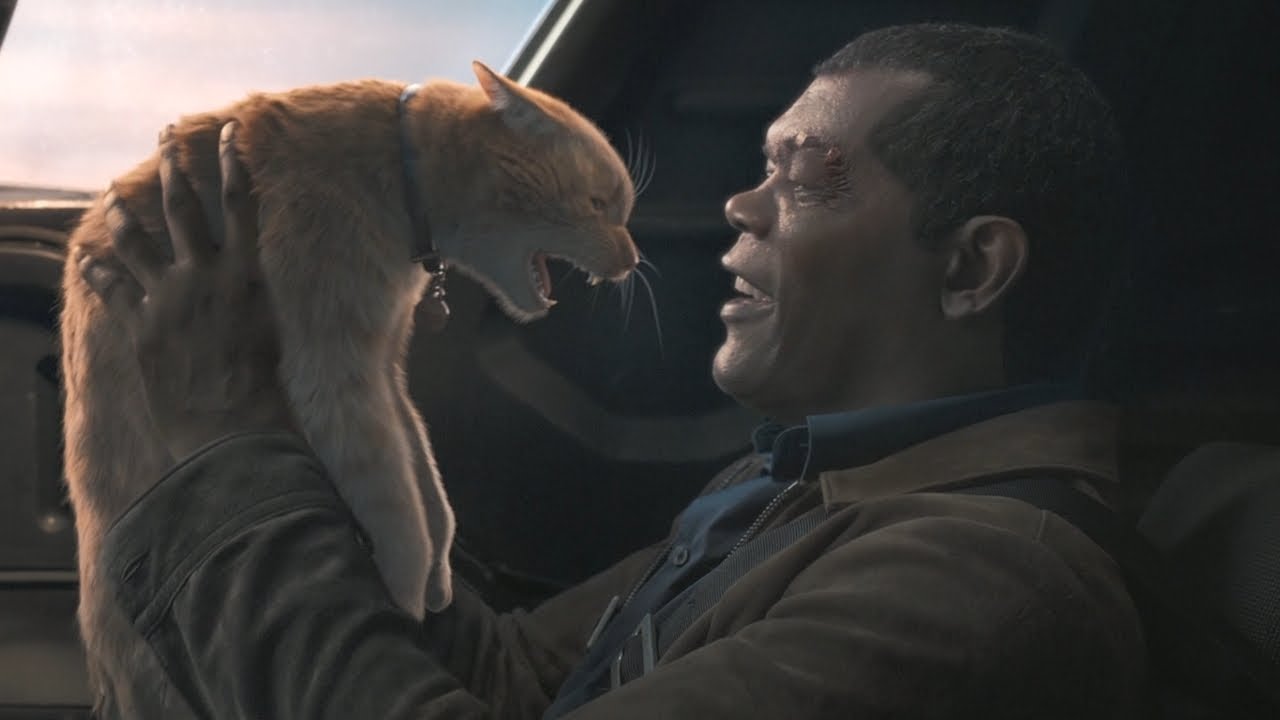 With the release of Captain Marvel movies, we finally get to know how Nick Fury truly lose his eye in the MCU. And if I’m being really honest it was surprisingly lame.

I still remember Captain America: The Winter Soldier, where Fury addressed how he lost his eye for the first time in MCU. And he said, “Last time I trusted someone, I lost an eye“. Remember that film came in 2014.

That dialogue really speaks volumes. It’s one of the best quotes of Nick Fury in my book. As it was a great response to one of the greatest Captain America’s quotes, that was:

“Soldiers trust each other. That’s what makes it an army. Not a bunch of guys running around shooting guns.“

And Nick Fury’s answer was really solid and makes you wonder how he lost his eye? But after 4 years, we finally got to know what happened. I mean his statement is still technically right. As he trusted ‘Flerken’ or ‘Goose the Cat’. But c’mon it was the lamest way possible.

However, right now, I am gonna talk about how Nick Fury lost his eye in the comics. So if you haven’t read any comics and wondering about this. Then you’ve landed at the right place.

Let’s first start with a short and precise answer:

In the comics, Nick Fury’s left eye got damaged in a grenade explosion while fighting in WWII. Although the damage at first was minimum, Fury refused to get surgery as it would take him out of action. Eventually, he lost 95% of his vision. In the MCU, Goose the Flerken who looks like a cat scratched his eye.

So guys this was a short summary of how Nick Fury lost his eye. But there’s more to the story and that is precisely what I’m gonna discuss in more detail in the forthcoming sections.

Let’s first talk briefly about the Marvel Cinematic Universe, in Captain Marvel we got to see how Flerken aka goose the cat scratched his left eye with his claw.

This is not a normal cat. It’s an alien species known as Flerken. They have a galaxy-sized stomach with tentacles in their mouth that can engulf anything.

When Nicky fury meets Carol Danvers/Captain Marvel in 1995. He also meets with this cat or creature and got attached to it.

But later he realizes its power and capabilities when he saw those tentacles and how he submerged Tesseract. And still, he trusted it to not eat him up but in the end, Goose scratched his eye and he lost his eye. So one thing for sure Flerken couldn’t be trusted.

In the Original Comics

Before we move into this, I want to inform you if you don’t know yet that the original version of Nick Fury was White. And then later we also had Black fury.

This is the original version of Colonel Nicholas Joseph Fury Sr. First appeared in Sgt. Fury and his Howling Commandos #1 in May of 1963. Created by Stan Lee and Jack Kirby. They decided to show Fury of Modern time i.e., in 1965.

He had gray hair at the temples and was already having an eyepatch. This fury was a cigar-chomping tough guy from Hell’s Kitchen, a World War II veteran who headed up the elite army unit called the Howling Commandos.

Well, after 3 years Marvel finally decided to tell a story about how he got that eyepatch. The comic, Sgt. Fury and the Howling Commandos #27, published on Feb. 10, 1966, showed the story of fury as a World War II Veteran.

In a grenade explosion Fury injured his left eye, though initially, the damage was minimal. And Fury could have gotten surgery to fix the eye but it would take him out of action too long.

So he didn’t do much at that time which eventually resulted in a 95% loss of vision in this eye and Hence he got that eye patch.

In the Ultimate Comics

The second version of Nick Fury was an African American. He served in the first Gulf War. It was the Ultimate Comics initiative out of Marvel Comics back in 2001.

Fury was transporting a deadly mutant through Kuwait. He then got ambushed in the middle of it and got wounded. Turn out that the mutant was wolverine and he saved fury’s life.

Otherwise, he wouldn’t just be wounded but dead for real. Wolverine carried him on his shoulders across the desert to save his life. However, he couldn’t save Fury’s eyes.

It’s been said that this version of Nick Fury was straight-up drawn to look like Samuel L. Jackson. And this was supposedly part of their plan to recruit Jackson to play Nick Fury in the first place.

The ultimate Comic version of Nick Fury was a huge success. And not to mention the success of Cinematic Nick fury played by Jackson.

Hence, Marvel decided to introduce Nick Fury Jr. in the mainstream Marvel Universe. He is a secret black son of the original Nick fury of the WWII era.

First appeared in Battle Scars #1 published in January 2012. He was captured by a long-time enemy of his father Orion. Who cut his eye out and make him look like his father.

He later escapes from the villains. And then Joins S.H.I.E.L.D. in a post as an agent. Since then he has also worn an eye patch like his Father.

Must see: Why Deadpool likes Unicorns?

So, guys, this was brief info about all the Nick Fury out there in Marvel Comics. Along with how they lost their respective eye. Let me know what do you guys think about their story. And which one do you like the most?

Mine’s favorite is the original WWII story. As it gives more depth and intensity to his character. Also, Don’t forget to share your thoughts about the MCU version in the comment section below.