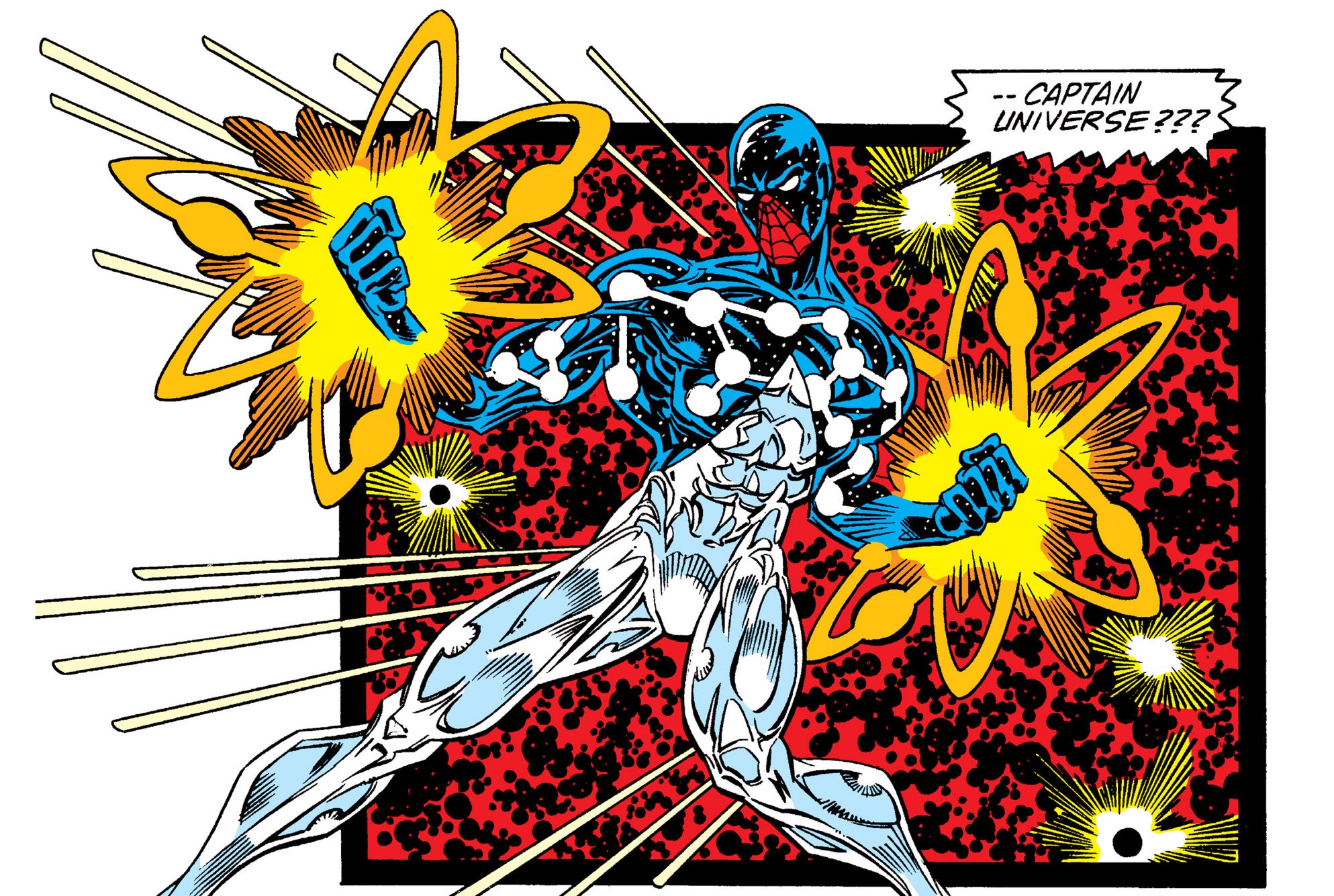 So this article is for all the Spider-Man fans out there. If you ever wondered that your friendly neighborhood Spider-Man couldn’t be any cooler. Then Just wait until you read this article about Cosmic Spider-Man.

Cosmic Spider-Man is the most powerful version of Spider-Man in the whole Marvel Universe. When he went cosmic he was as Powerful as Superman, Shazam, and Sentry. He could even beat the Mighty Rune King Thor.

So let’s start with a brief and precise summary of How Spider-Man became cosmic and gained the Powers of Captain Universe:

Once Spider-Man was helping Max Lubisch, a professor at Empire University, where one of the machines in his lab overloaded and unleashed Enigma Force, which then flowed through Peter’s body, giving him the cosmic powers of Captain Universe and He emerges as Cosmic Spider-Man.

So this was his origin in short and I’ll discuss him in a little more detail in the forthcoming sections. But before we get into his story, here are some things/terms you should be familiar with:

So, from these points, it must be clear that somehow Uni-Power chose Spider-Man. And Hence he went Cosmic and got those Legendary Powers to protect the Balance of the Universe.

But we’ll discuss that whole event and the power and Abilities, along with some top feats of this version of Spiderman.

This all happened in the Acts of Vengeance storyline. In this series, a Ton of Marvel Villains came together to fight with the heroes and take over the World.

We’ll discuss just a short version of this story, As to what leads him to obtain cosmic power. So here’s how it goes:

In The Spectacular Spider-Man (1976) #158, Loki decides to make a Team of Villains. He was somehow successful and manipulated Magneto, Red Skull, Doctor Doom, the Kingpin, Wizard, and the Mandarin to join his forces.

His main principle behind this idea was that the heroes have become too familiar with their regular enemies. So they needed to come together and beat their foes one by one.

While this idea sounds good, However, it wasn’t as effective against Spidey as Loki thought. And No matter how they planned to beat him out. Spidey always comes on top.

So to tackle Spider-Man Loki created Tri-Sentinel with his magic. If you’re wondering what a Tri-Sentinel is? Just remember these bad boys from the X-men: Apocalypse:

And now just imagine 3 sentinels combined into one, hence Tri-sentinel. Therefore no doubt spidey would face a tough competition or even couldn’t defeat him.

But one incident happened before spidey could meet Tri-Sentinal. Here is how it goes:

Spider-Man was helping out Maxwell Lubisch, who is a professor at Empire University. They were trying to tap into the extradimensional power source, but one of the machines in his lab overloaded and unleashed Enigma Force. This Enigma Force then flowed through Peter’s body, giving him the cosmic powers of Captain Universe.

It’s been said that Uni-Power chose Peter because Enigma-Force foresaw the threat of the Tri-Sentinel.

Related: Strongest Version of Thor: He is way too powerful to be in the MCU movies.

Here we’ll discuss some of the Major Powers and Abilities of this version of Spider-man.

After getting Uni-Power, Peter’s skin became virtually indestructible. His skin could withstand the difficulties of deep-space travel.

He became highly resistant to almost any kind of physical injury. Cosmic Spidey could withstand the crushing pressures of a black hole or even supernovas.

There are four fundamentals of forces in Nature namely gravitational, electromagnetic, strong nuclear, and weak nuclear forces. And Cosmic Spider-Man has complete control over all of them.

Hence he can rearrange matter and can even change the form of the elements. He can even channel beams of energy through his bare hands that are powerful enough to destroy planets.

Spider-Man was able to turn his webbing into Adamantium. A virtually indestructible perhaps strongest metal in the Marvel universe.

Here are some more abilities he gets due to the power of Matter Manipulation:

Because of the cosmic powers, Spidey doesn’t even need to eat or breathe. As he can absorb life-maintaining cosmic energy directly via his skin.

Cosmic Spidey can attain 99% of the speed of light that is 186,000 miles per second (299,792 kilometers per second). And hence he can displace himself in Hyperspace, a dimension where velocity is not limited by the Time speed.

We already know that Peter has Spider-senses but with cosmic energy, even his senses get enhanced and it goes to a whole new level.

He has cosmic-level perceptions that make him aware of even little changes in the patterns of energy anywhere in the world.

This energy grants him a far-ranging vision (Uni-Vision), he can see people clearly over a light-year away. He can also see sub-atomic particles, has superhuman hearing, can detect fields, traces, and concentrations of pure forms of energy, and discern their natures.

Take this incident for an example, In a fight between Pete and Magneto, Magneto throws a car at him but Spidey doges it.

But his Telescopic Vision (Uni-Vision) kicks in and he sees that the car actually crashes with a Cruise Ship.

But here’s a more interesting part. As cruise was soo far and he couldn’t swing with his webs.

So he just says “Fly?” and cosmic powers were like Boom, you looking for this.

This version of Spidey never exhausts. Because of his enhanced musculature, his body generates close to zero fatigue toxins. He never even sweats doesn’t have any Body stress.

These enhancements grant him inexhaustible physical stamina. Hence he could fight his enemies for a longer period without getting tired.

Check Out: Best quotes from your friendly neighborhood spider-man

Cosmic Spidey has infinite superhuman strength. Hence the exact magnitude remains uncertain. As discussed above, in the incidence of a sinking cruise ship, he actually lifts it and carries it to the shore.

He can lift far more than 100 tons like it’s nothing. In fact, Uni-Power can increase his strength to endless levels.

Must Read: The story of Old King Thor

Some Feats of Cosmic Spider-Man

Here are some of the top achievements of Spider-man when he became cosmic. Also, note that anyone who becomes captain Universe may or may not be able to do these things and have all the powers listed above.

So we can’t exclusively say that these things stated below can be only done by Cosmic Spidey. Maybe anyone who gets Uni-Power might be able to achieve these feats. So here we go:

Here’s an incident where Cosmic-Spidey Punches Grey hulk into orbit.

Hence Hulk was just floating around the earth lost in space. So spidey had to fly into space and bring him back.

After that Hulk says to him “if you’re looking for thanks forget it, I would have saved myself somehow. Still, it was a nice gesture, so I’m going to return the favor. I won’t kill you this time.”

Spider-Man then replies to him and said “kill me? After doing what I just did I’m not sure I could even die.”

A similar incident happened with Thor Odinson as Cosmic Spidey punched him into orbit just like Hulk. But Thor can return back on his own.

So, these were just 2 of the many achievements of Cosmic Spider-Man. Only 2 are listed because if I decided to write all of them, this article won’t probably end.

After all this info about the Cosmic version of SpiderMan, I’m even willing to accept that he might be the strongest being in the Marvel Universe.

But the problem is anybody who Uni-Power chooses may or may not have all the abilities of Captain universe. So we can’t truly say anything about it. But one thing for sure is Captain Universe is just way too OP.

Imagine seeing him in live-action MCU. However, as of now, it seems that he is just way too powerful for the MCU. But we’ll see how it goes in the future.

Anyways let me know what do you think about the Cosmic version of Spider-Man and his powers in the comment section below.