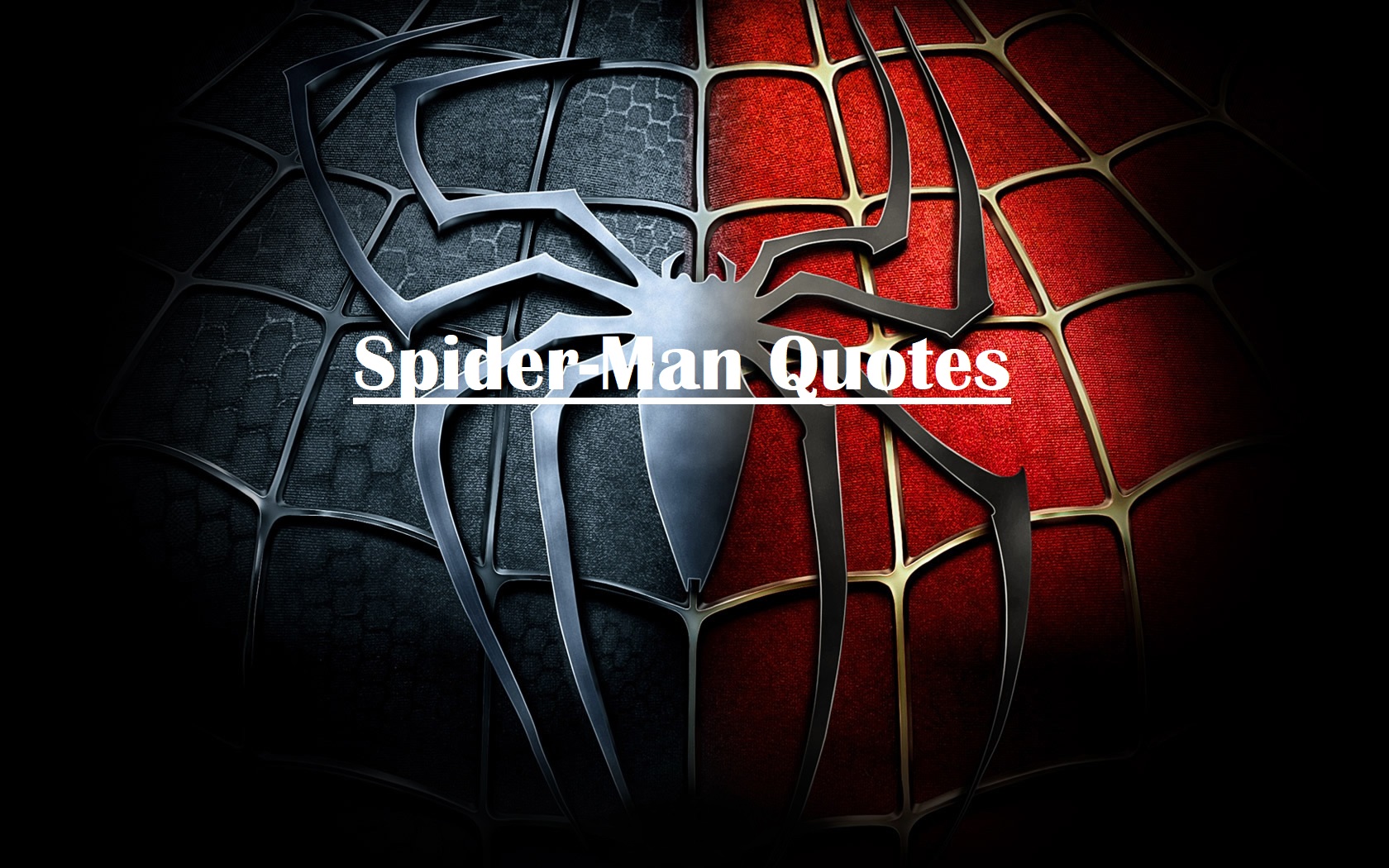 Hello everyone, I am back again with the MCU quotes series. Where we share top quotes from the MCU universe. But this one’s a little different.

Today, I am gonna share the best Spider-man quotes not just from the MCU but from every spider-man movie. There is a reason why Spider-man is so popular, he is the most relatable hero from the Marvel Universe.

Peter Parker was first introduced as a powerless and nerdy teenager with insecurity issues. And even after he got powers he has to deal with a lot of real-life problems that most people can relate to.

No wonder that Spider-Man films have grossed over $6.3 billion collectively at the global box office. Not to mention Disney earns over $1 billion per year with Spider-man’s merchandise. Without any further due let’s get started:

No better way to start this quote list than this one. At the end of Spider-Man (2002), Peter finally understands his importance and what he needs to do. He can’t just move away from his responsibilities.

As he recalls what his Uncle Ben Parker said to him:

“Whatever life holds in store for me, I will never forget these words: With great power comes great responsibility. This is my gift, my curse. Who am I? I’m Spider-Man.”

From this moment he decided that he is gonna be Spider-man forever no matter what.

2. “For me, the choice to lead an ordinary life is no longer an option.”

This quote comes from the Trailer of Spider-Man (2002 film) where Peter says, “Not everyone is meant to make a difference. But for me, the choice to live an ordinary life is no longer an option.“

Even though this quote was not in the movie. It still completely resonates with Peter’s character. He was just a normal insecure kid before he was bitten by a radioactive spider.

And then through his life lesson, he learned the mantra, “With great powers, comes great responsibility.” So an ordinary life is no longer his choice now he has to that what he is made for.

3. “No matter what I do, no matter how hard I try, the ones I love will always be the ones who pay.”

This quote perfectly sums up Peter Parker’s internal struggle, and that’s what makes him so relatable to us. Besides his heroic life, he also faces all normal life problems as we do in fact even more than us.

His double life leads to the death of his Uncle. And so he has kept him distant from his loved ones like Mary Jane, Aunt May, and Harry. Because no matter what he will be the one who will suffer the most.

4. “It’s as if you’ve reached the unreachable and you weren’t ready for it.”

When Mary Jane ask Peter did Spider-Man mentioned her. He speaks from the heart as he is the Spider-man of course. Here’s what he said:

“The great thing about MJ is… when you look in her eyes and she’s looking back in yours… everything… feels… not quite normal. Because you feel stronger and weaker at the same time. You feel excited and at the same time, terrified. The truth is… you don’t know what you feel except you know what kind of man you want to be. It’s as if you’ve reached the unreachable and you weren’t ready for it.“

5. “Sometimes, to do what’s right, we have to be steady and give up the thing we want the most. Even our dreams.”

This quote is from the climax of Spider-Man 2, where Peter confronts Doctor Octopus and tries to bring him to his senses. Peter said that you once said that intelligence is a gift to be used for the greater good. To which Doc replies, “A privilege”.

Hence Peter continues that these things have turned you into something else… don’t listen to them. Doc said this was my dream. And then comes Spider-Man’s quote:

“Sometimes, to do what’s right, we have to be steady and give up the things we want the most. Even our dreams.“

These lines are so true and powerful. Sometimes we have to give up and sacrifice things for the greater good. Even if that means sacrificing our dreams.

6. “Whatever comes our way… whatever battle is raging inside us, we always have a choice.”

Peter parker narrates these lines as the Spider-Man 3 film is about to end:

“Whatever comes our way… whatever battle is raging inside us, we always have a choice. My friend Harry taught me that. He chose to be the best of himself. It’s the choices that make us what we are… and we can always choose to do what’s right.“

This quote is too deep and so true to our real world. No matter how hard the circumstances are we can always choose to do what’s right. Even though sometimes it is hard we always have a choice.

7. “We all have secrets: the ones we keep… and those ones that are kept from us.”

This quote comes from the Trailer of The Amazing Spider-Man (2012 film), Where Parter Parker said, “We all have secrets: the ones we keep… and those ones that are kept from us“

This quote is so true, we all have our secrets, the things we don’t wanna talk or share about. And the same goes for other people, some things are kept secret from us.

8. “Every day, I wake up knowing, that the more people I try to save, the more enemies I will make”

This quote is from the trailer of The Amazing Spider-Man (2014 film). Here’s what Peter said:

“Every day, I wake up knowing, that the more people I try to save, the more enemies I will make. And it’ll just be a matter of time before I can take on a force that I can’t overcome.”

These are one of those quotes I always list from the trailers that are not actually in the movie. However, they completely resonate with the characters in the movie itself. And this is one of them.

9. “And then the bad things happen they happen because of you.”

This quote is what I believe to be the MCU’s version of “With great powers comes great responsibilities.” I still can’t believe that they pulled this off so well without sounding it corny or repetitive.

Even Tony Stark silently agreed that yes this kid is right. Here is the full quote: “When you can do the things that I can, but you don’t, and then the bad things happen, they happen because of you.”

Check out: Cosmic version of Spider-Man who is way too powerful for MCU movies

This quote is from Infinity War where Peter doesn’t obey Tony’s order and was still on that donut spaceship. When Tony asked what are you doing here this isn’t a field trip it’s a one-way ticket.

To which Peter replied, “You can’t be a friendly neighborhood Spider-Man if there’s no neighborhood.” But just a few secs later he said: “Okay that didn’t really make much sense.“

And I was like no that does, it perfectly makes sense. Even Tony was like “No, he’s got a point” for that moment.

This quote is from Tom Holland’s Spider-man from Infinity War and I find this quite funny and hilarious. As Peter asks Stranger that they have met yet and introduces him as Peter to which Stranger replied, “Doctor Strange.”

Peter find this name unusual and so did I when I first came to know about him. So Peter thought that this is his superhero name and hence said, “Oh we’re using our made-up names I’m Spider-man then.“

One of the hardest and emotional moments ever from the MCU. I didn’t have any idea like wtf was going on at the end of the Infinity War movie. And on top of that, we got this Spider-Man scene.

Where Peter is literally crying while trying to hug Tony Stark. Even though some part of me and I know as well as yours knew that this is temporary as he still has more films in his contract. But still, that scene was really touching.

One of the most heartbreaking moments from the Avengers: Endgame movie. When Peter was sobbing and at the same time telling his mentor Tony Stark that they finally pulled this off, “We won Mr. Stark.”

Marvel tried to make Tony Stark as MCU’s Uncle Ben and I think they pulled it off extraordinarily. And seeing his father figure and our fan-favorite Tony Stark die, it sure was an emotional moment. But as Tony said, “Part of the Journey is the End.“

This quote is from the trailer of Spider-Man: far from Home. Where Tom holland is seeing missing his mentor Tony Stark. He quotes “Everywhere I go, I see his face. I just really miss him.“

I don’t care what everyone says about MCU’s Spidey and refers his as Iron Man Jr. or Stark’s sidekick. I love Tom Holland’s Spider-Man and all these criticism are faulty and boring.

As the whole Homecoming movie was about him dealing without the suit given by Stark. And in the end, he even refused to take that Iron Spider suit.

Then we have Far From Home which deals with him moving on from the death of his mentor. He even clearly confronts Happy that he just can’t be the next Iron Man.

Peter finally comes on top against Mysterio. With the help of his Peter Tingle or Spider-sense, he was able to finally understand Mysterio’s trick.

And hence he said, “You can’t trick me anymore.” Is he though? I think Mysterio pulled off one last trick and actually tricked Peter Parker once again.

I hope he is still alive as he does have the potential to be a good villain. Especially when we have a speculation of a potential Sinister Six movie. In fact, he is one of the greatest Spider-Man villains in the comics.

Anyways, guys, these were some of the best quotes from the Spider-Man live-action movie franchise. I hope you guys liked these quotes. Also, let us know what is your favorite quote of Spider-Man in the comment section below.