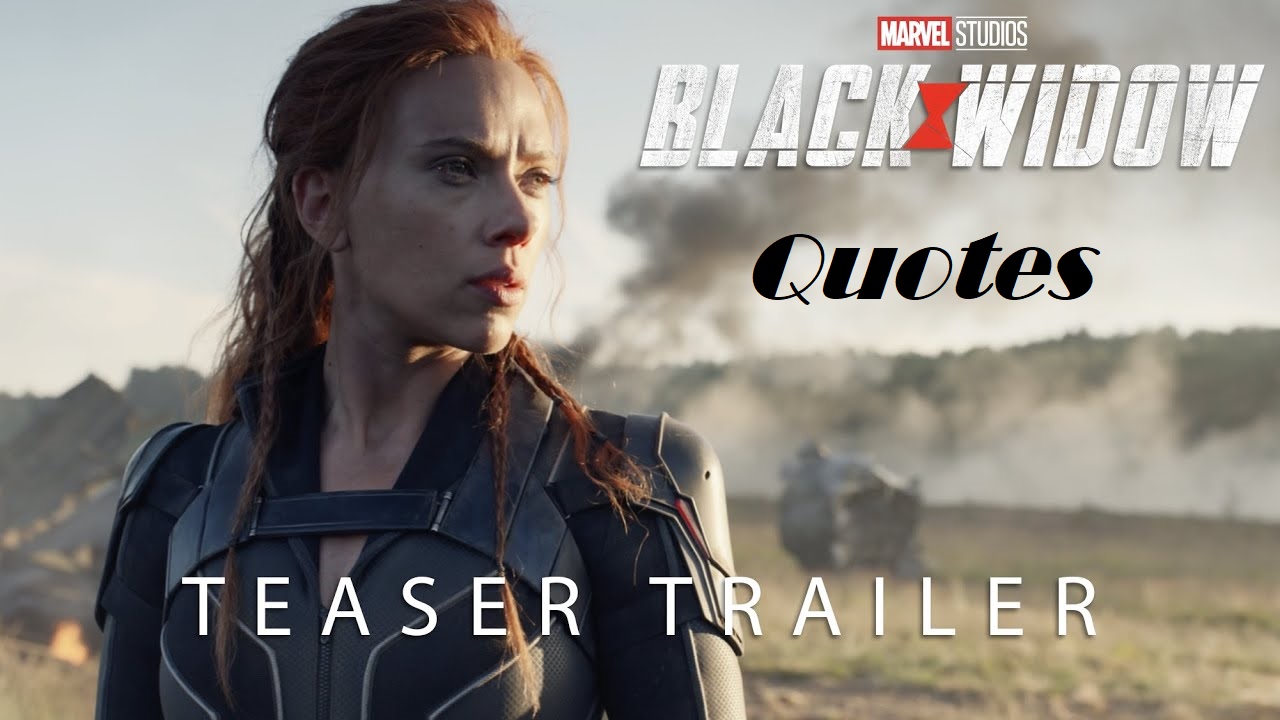 Hello, guys, I am back again with the MCU Quotes series and this time we’re gonna share some of the top Quotes we got so far from the Upcoming movie Black Widow. Listen, guys, I don’t wanna bore you, but I have to. So, before we get to the list here is little info about the movie.

Black Widow is an upcoming superhero movie, set in the Marvel Cinematic Universe. It is going to be the 24th film in the MCU and will kick-off Phase 4 of MCU.

While Black Widow is still more than 2 months away from now (sh*t! shouldn’t have said that). But here I am with the best quotes from the Black Widow movie we got so far from trailers and spots.

Ever since Black Widow/Natasha Romanoff appeared in ‘Iron Man 2’ and later became an original Avenger in ‘The Avengers’ movie. Fans were waiting for her solo movie. But don’t know why Marvel didn’t go that way maybe because they were too afraid for a solo lead female superhero movie.

However, no after the huge success of WB’s Wonder Woman and their own Captain Marvel movie, they are finally gonna do a Black Widow movie.

Some fans are disappointed as she is already dead and what’s the point of this. While some fans are hyped as they will get to know more about her past. Anyways for me, it’s better late than never.

So here are some of the best kickass quotes from the Black Widow Movie that will just pump you up and get you hyped even more for this movie:

This quote comes from Natasha. The trailer itself starts from this dialogue. Natasha quotes: “I used to have nothing… And then I got this job.. this family…But Nothing lasts forever…“

I am pretty sure this ain’t gonna be in the movie. As the first part of this dialogue it straight from the ‘Avengers: Endgame’. But we’ll see how it unfolds.

This seems like Natasha’s version of “Part of the Journey is the End“. We’ve also shared Top quotes from Tony Stark’s MCU Journey. Make sure to check them out as well.

We have been teased a lot about Natasha’s past and finally, now, we’re gonna see what her past has to offer. Like I’m seriously excited about what happened in Budapest.

In the trailer, we see in the trailer as Thaddeus Ross said that you have to leave in a hurry, and what is she gonna do now? To which Natasha replies: “I’m done running from my past.“

However, one thing to note here is that Ross is extremely de-aged. So it’s hard to say if that’s the conversation after the ‘Civil War‘. Maybe we’re gonna get some info about his past as well.

So that’s how two Assassin sisters reunite. Yes, if you didn’t know it already. Yelena Belova is like her sister figure and she is also a Black Widow.

I would love to see what this sister-relation has to offer us. And also what’s the future of Yelena in the MCU. So here’s how this conversation goes:

Yelena: I know you’re out there

Natasha: I know you know I’m out here, So are we gonna Talk like grownups?

Yelena: Is that what we are? Proceeds to fight. So definitely not grownups. Though that fight scene looks awesome. Hope there are more badass fight scenes in the movie.

After the fight ends, Natasha says “it’s nice to see you too…sis”…Hmm, which means it’s completely normal for them to reunite and have some fight. In fact maybe if they don’t fight that means they aren’t fine.

Anyways, then Yelena asks her “What brings you home?“. To which Natasha said, “I’m on the run”. Now here it’s confirmed that this timeline in between the ‘Civil War’ and the ‘Infinity War’.

Related: Quotes of God of Thunder, Thor from his MCU journey

Natasha continues and tells her sister that she tried to do something else and be more than just a trained killer.

To which Yelena replies “You’re fooling yourself…We’re still both trained killers”. Here’s where Florence Pugh lost her Russian accent. Man, she is looking so lovely in this movie.

Natasha then explains to her that she has things to do. And said, “We have Unfinished Business” and they have to go back where it all started. To which Yelena replies “Who’s we?“

Then enters Hopper from stranger things as Alexei/Red Guardian in the chat. We got some funny moments from him as well. It’s good to see David harbor in the Marvel Universe. Hope this character has some future in the MCU.

7. Alexei: “Family Back Together again”

As Natasha explained whatever it is, it’s going to be a hell of a reunion. Enters Alexei who says that this dress still fits him. So are we going to see more about his past also? Most probably and later he quotes “Family back together Again“.

Marvel still never missing a chance to break the tension with the jokes. And I’m not complaining I love these jokes. Melina replies to Alexei “You got fat“.

Here’s his comeback: “It’s mainly water weight“. Though some people of social media criticized Marvel for pointing out this joke as marked this as Body Shaming. However, I think it’s totally normal in the family-get-together.

We are also going to see the world of widows in this movie. As Natasha quotes that there’s a whole new world of Widows out there.

This entire scene is so powerful. Seeing all that new girl power emerging in the MCU. I think there’s a reason why this is in Phase 4. Maybe Black Widow still has a future in the MCU.

As Scarlett Johansson has already said that if this movie was made earlier it wouldn’t have as much impact as this is going to have now. So we’ll have to see how it turns out to be. But this got me so much excited for the movie. And yes I want for Florence Pugh in the MCU.

10. Natasha: “Sometimes we all have to choose”

This quote really hits hard. As we hear Natasha’s voiceover: “Sometimes we all have to choose between what the world wants us to be…and who we really are…“.

I find this quote really deep. It resembles Joaquin Phoneix’s Joker’s quote “The worst problem about having a Mental condition is people want you to behave as if you don’t.“

So these are some of the best quotes we got so far from the Black Widow Movie. We’ll keep updating this list as we get more Trailer or TV spots and also when the movie finally releases.

So keep checking this space for more. And also let me know what’s your favorite quote from this movie by commenting down below.