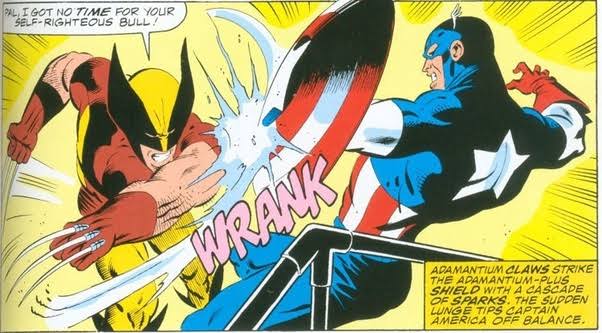 Two of the strongest metal in the Marvel Universe are Vibranium and Adamantium. Ever wondered who would win a fight between Wolverine’s claw vs Captain America’s shield?

It’s the question of decades among marvel fans. Which metal is stronger? Virtually Indestructible Adamantium or Vibrations absorbing Vibranium. As a matter of fact, each of them has prevailed over each other at times.

But which one is the strongest overall. Don’t worry I am here to break it down. Let’s start with a short and brief answer:

While Adamantium is denser metal, Vibranium is more durable. Adamantium has high molecular integrity than Vibranium. This makes it capable of drilling with greater effectiveness. Adamantium can cut through almost any known substance including Vibranium. But with one exception of Captain America’s Shield.

So that was the short answer. Let’s discuss this fight in detail. First, we’ll discuss the origin of both the metal and then we’ll compare them side by side.

Adamantium, a virtually indestructible steel alloy. It is named after the legendary metal Adamantine of Greek mythology. Adamantine is just adamantium but godlier. Yes, that’s pretty much it.

During his research, he once accidentally created an indestructible Vibranium-steel compound. Later, that compound was used to create Captain America’s shield. That’s the main reason why Adamantium can’t tear through the Captain’s shield. Because it’s not pure Vibranium rather an alloy.

However, later in his lifetime, Dr. Myron tried to recreate that compound for decades. But he never succeeded in his experiment but eventually, he created another alloy or compound now known as Adamantium.

Related: Mjolnir vs Stormbreaker: Which Thor’s weapon is more powerful. Find out in this in-depth comparison.

Vibranium is a rare metallic substance. It has a very old history. In the Marvel Universe, it’s said that it was first deposited by a meteorite about 1,000,000 years ago. That’s a hell lot of time.

It’s believed that Vibranium has an extraterrestrial origin. Though it’s never confirmed or proved.

However, there is not just one version of this precious metal. In fact, there are many known isotopes of Vibranium. Two of the most famous isotopes are:

In the comics, the first isotope or version of Vibranium ever discovered was this version. During a voyage of a Human to Antarctica, he found a particular isotope of Vibranium. That came to know as Antarctic Vibranium.

Vibranium B and Savage Land Vibranium are one of the other names of this version. Because it was found in the isolated region of Antarctica known as Savage Land. It is also famous by the name Anti-Metal.

But here is the question, Why it is called Anti-Metal?

This version or isotope is different from the Wakandan isotope, which we’ve seen in the MCU so far. It doesn’t absorb the vibrations instead it emits them.

As a result, when it gets in contact with other metals, the atomic and molecular bonds in nearby metals get weak. Hence, resulting in the liquefaction of those metals which get in contact with it. That why it’s called Anti-Metal. It can even liquify Adamantium.

As the name suggests, it’s the version or isotope that was found in Wakanda. This version is different than the Antarctic version.

It’s a completely different variety of Vibranium that is found in Wakanda. This version of vibranium is capable of absorbing sound waves and other Vibrations. Heck! it can even absorb Kinetic energy.

Due to it’s absorbing power of absorbing vibrations it makes this metal (version) stronger and more valuable. That also answers our question of how Captain gets his shield back when he throws it. Although it also requires superhuman strength to exert strong pressure so it can bounce back.

Wakandan ancestor discovered this metal. As we see in the movie, Black Panther, to protect this precious resource they’ve hidden their country from the outside world.

Related: Wakanda Forever! and 9 other quotes from T’Challa

As we’ve already discussed, Adamantium is virtually indestructible. It can tear out any form of substance, literally. So pure Vibranium doesn’t stand a chance against Adamantium. Unless of course, it’s an alloy/compound of Vibranium like Captain’s shield.

Here are the key points to prove this:

In the MCU, During the Black Panther film, Shuri explains T’Challa that his suit isn’t completely indestructible. As she quoted “Too much impact can overload it.” This means the vibration it can absorb that’s why she upgraded the suit which then makes a recurring blast to release some load.

Anyways, both metals have their weak and strong points. But comparing them solely based on their strength, No doubt Adamantium comes on the top.

But that doesn’t make Vibranium useless. Adamantium might be stronger in strength. But when it comes to being versatile Vibranium wins the race. As quoted by Ultron:

“The most versatile metal in the world and they used it to make a frisbee.“

FAQs about Vibranium and Adamantium

Here are the answers to some popular questions or misconceptions about these two metals in the Marvel universe:

1. Are Vibranium and Adamantium the same in MCU?

A lot of MCU fans think that to ease things out Marvel has planned to make both the metal same in MCU.

But No, that’s not the case Marvel couldn’t use adamantium or even reference it in the MCU. Because Fox has the rights to X-men properties.

However, Disney has finally bought Fox studios, we’ll soon get to see X-men characters in the MCU. And of course, With X-men comes Wolverine’s claw which is made from Adamantium.

So sooner or later we’ll get to see Adamantium making it’s way to the MCU.

An interesting point to note here is how Marvel will introduce them to MCU. Because as we’ve read earlier, roots of the origin of adamantium go back to World War II.

Even Logan fought in World War II as did our Steve rogers. Though that’s a different topic to discuss for another day. So, as of now:

No, adamantium and vibranium are not the same metal in the MCU

2. Is there any Vibranium and Adamantium alloy or compound?

Yes, there exists an alloy made from these two metals. Here are some of the details:

In the comics, Earth-616, Captain America’s shield is made of proto-Adamantium. An alloyed mixture of both Vibranium and Adamantium.

However, in the Marvel Cinematic Universe (MCU), Earth-199999, Captain America’s shield is composed of a Vibranium-alloy. Which gives it the absorbing properties.

3. Is Uru metal stronger than Vibranium and Adamantium?

So after all these differences and discussing the properties of both the metal. We can easily say that Adamantium is harder and stronger than Vibranium.

However, it all depends on needs and circumstances. Captain’s shield works better from him as he always gets his shield back due to its vibration-absorbing properties.

While Wolverine’s claws help him to cut through his enemy’s bodies. So it all depends on what you want with your weapon.

Anyways, let me know what do you prefer among these two in the comment section below.