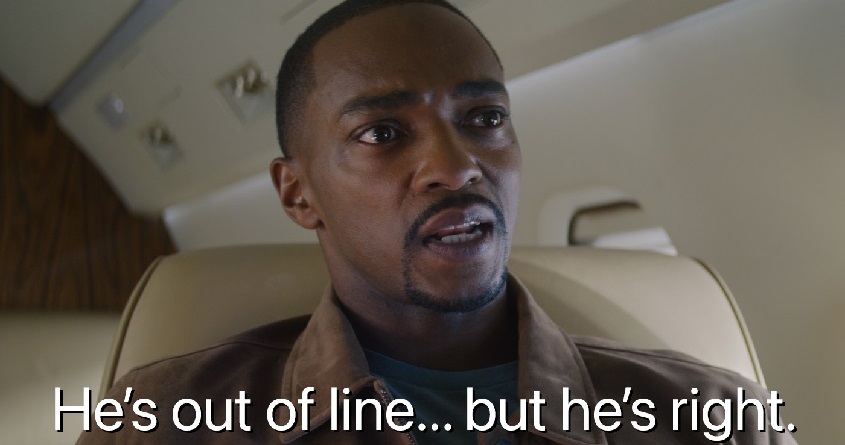 One of the best meme trends we got from the new MCU Disney+ Shows is this one: He’s out of line but he’s right. This quote/meme has gone viral since then.

He’s out of line but he’s right meme Origin

“He’s out of line but he’s right” is a quote said by Sam Wilson aka Falcon in The Falcon and the Winter Soldier series.

This particular scene is in the third episode of the series where Falcon and Bucky were on board with Zemo on his plane. And they were discussing Marvin Gaye’s music.

And then Zemo makes a comment which Falcon agrees with but not in the same way. Here’s how the conversation goes:

Falcon: I told him about Trouble Man. He wrote it in that book. Did you hear? What’d you think?
Bucky: I like ’40s music, so…
Falcon: You didn’t like it?
Bucky: I like it.
Zemo: It is a masterpiece, James. Complete. Comprehensive. It captures the African-American experience.
Falcon: He’s out of line, but he’s right. It’s great everybody loves Marvin Gaye.

So that’s how the meme was born. This is usually used for hot takes somewhat similar to the Worst person you know just made a great point and Why would you say something so controversial yet so brave memes.

Here is a high-quality meme template for all those memester who want to show their creativity. So, go guys get your arrows, and get started:

10 Best Funniest He’s out of line, But he’s right Memes

That’s enough for the original and history of this meme trend. Now let’s dive straight into the best memes based on this template.

The earliest version of the meme had the text of another meme i.e., the worst person you know just made a great point added to the second panel.

This meme was posted by Leashlessconfusion on Tumblr on 2 April and accumulated over 16,787 notes in 10 days.

A thought experiment on Wolverine’s healing factor? Count me in. This meme was posted by Redditor nightwing_2 on r/pewdiepiesubmissions which gained over 548 upvotes and 31 comments in six days.

Here comes the Hot take use of this meme and it’s a hot take that I completely agree with.

Must See: I’m gonna burn this place to ground memes

But if you’re please let me know whether this is true or not.

Some Dank meme for Atheist teen. Please don’t take these memes after all they’re just for fun.

Quite literally a meme about the inception of word brain.

Related: No, I don’t think I will memes

9. That’s how Salt was first used

That Caveman to everyone else: Hear me and rejoice.

10. Crossover we all deserved

Did you guys know this fact?

So, guys, these were some of the best memes from Falcon’s “He out of line but he’s right” quote. I hope you guys enjoyed this. Also don’t forget to like us on Facebook, where we share marvel memes on daily basis.