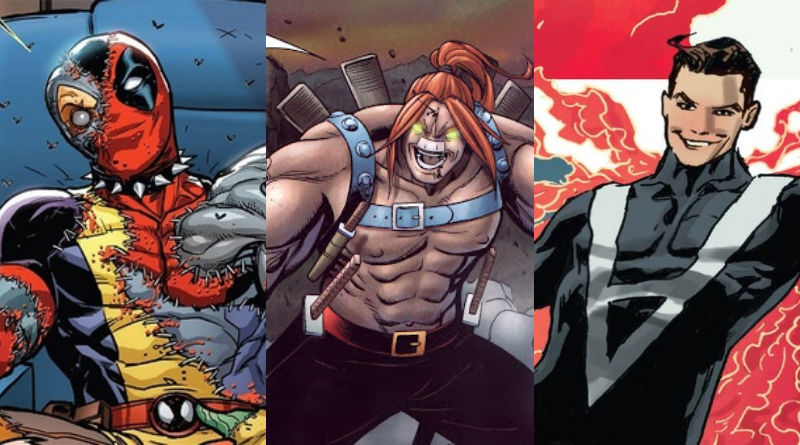 Wade Wilson aka the mercenary Deadpool has faced a lot of villains in his anti-heroic career. With his superhuman ability of an accelerated healing factor and physical prowess he has pissed a lot of people in his life.

No wonder he is also known as the “Merc with a Mouth” because he tends to talk and joke constantly, including breaking the fourth wall for humorous effect and running gags.

Today, we’re gonna dig down deep to explore the history of the 10 worst enemies of Deadpool and we’ll see exactly how the “Merc with a Mouth” came across them.

Here you’ll find some information about these Deadpool Villains. We’ll discuss all these characters in a little bit more detail. So without any further delay, let’s get started:

Even though Dr. Emrys Killebrew didn’t have any special powers but he was a genius scientist with degrees in genetic engineering and splicing. He was assigned to handle the failed experiments from the Weapon X program.

He would constantly experiment on and torture countless patients until they finally die in his laboratory called “The workshop.” One of his favorite patients was Wade Wilson as he was tough to kill through his testing and experiments.

In Killebrew’s final experiment he decided to give Wade a healing factor by giving him some of Wolverine’s DNA and then attempted to kill him that causing Wade’s enhanced healing factor to finally fully activate where he nearly died in that experiment.

Wade then found a way to escape and became a mercenary now known as Deadpool. Since then he has come across Killebrew a lot of times and still has a desire to kill him. But eventually, he forgives him.

Checkout: Top 10 Most Powerful Mutants of all time

Allison Kemp was a Former FBI and Interpol agent. During one of her mission in Chicago, she was crippled by an explosive that was set by Deadpool. She ended up Tetraplegic and hence used Wheelchair.

After suffering from her injuries for nine years, Agent Kemp then sought revenge on Deadpool. She then used a failed joint operation to capture Deadpool in New York as an excuse to retire from service.

Agent Kem also hired two assassins who are also arch-enemies of Deadpool. But Deadpool defeats both of them and tells her that he had no idea that she was an undercover agent nine years earlier.

Kemp then has second thoughts about her revenge and was about to blow herself but then appears Evil Deadpool and she again decides to finally kill Deadpool one and for all.

Macho Gomez belongs to an Alien species from outer space. He is a trained assassin and is said to be “The most badass and feared operator in the galaxy.” He came across Deadpool when he was hired to assassinate the family of Amalgamated Armament C.E.O. Reginald Harris.

However, he was tricked into thinking that Deadpool already did the job. After that, he decided to go after Deadpool because of the wages he lost due to him. He eventually fought with Deadpool but was defeated.

He later found out that Reginald Harris faked his death when he tracked Deadpool at the home of Reginald. Gomez again fought with Deadpool but yet again he failed and escaped with his ship and was ejected into space. Since then he has never missed any chance to fight him.

Find out: Wolverine vs Deadpool: Who would win?

Black Tom was a mutant born in Dublin. His initial power was that he could generate blasts of heat through a wooden medium. Later he became a criminal and eventually was apprehended. While serving his time in prison, he became friends with Juggernaut.

Since then the two worked together on their many missions and adventures. Black Tom once got involved in a fight with the X-Force where Cable shoots him down and Deadpool takes him to Mr. Tolliver.

This fight leads him to his infamous transformation. To heal his injuries doctors have to graft a wood-like substance onto his wounds. This allowed him to channel his bio-blasts directly through his fists.

Later in one of his mission with Juggernaut, he came across Deadpool multiple times. and uses his wooden hand to the back of Deadpool’s head. Sometime later due to his genetic genes, the plant substance spread over Tom’s body.

However, the mutated cells of the mercenary Deadpool helped him a bit which he got from his encounter with him. But even this treatment didn’t last long and the Plant part of his body took over. Jack Kesy appeared as Black Tom Cassidy in Deadpool 2.

Lester Verde aka The Doctor Bong was initially an arch-enemy of Howard the Duck. He got his name because of his bell-shaped head which he would then bong to stun or kill his targets. Bong was originally shown as a journalism student but was revealed later as a skilled scientist.

He used his knowledge of chemistry and physics to create several devices and creatures. It was revealed that he gave up supervillainy to obtain a Ph.D. in psychology. His first patient was Deadpool, however, he again starts with his evil work.

Once he created imperfect clones of Steve Rogers, Moon Knight, and Black Widow and lured Deadpool into teaming up with them. He then used his bong to make the whole facility crash down and make his escape. Bong eventually fought with Deadpool and just as he was about to use his bong again Deadpool cut off his hand.

Two people have taken the alias Black Swan in the Marvel Universe. The first and the original Black Swan was a german mutant with the ability to implant a psionic virus into another’s mind which disrupts mental processing and motor functions.

He used these abilities to become a successful mercenary and came into conflict with Deadpool when he was falsely credited for Swan’s work. Hence he felt insulted became he was the one who performed those high-profile kills.

Deadpool was then hired to kill the Black Swan in Germany. However, this was all planned by Black Swan to beat Deadpool. In which he succeeded as he infected Deadpool’s mind with a mental “virus”. He brought him to the U.S. and let his goons beat him periodically to prevent him from healing completely.

Later, Deadpool decided to make this even, carrying a bomb with him. He tracked down Black Swan and his bomb went off seemingly killing all of them both. However, Black Swan also survived because he somehow absorbed physical traits from Deadpool.

Since then they have fought many times and even worked together but Black Swan double-crossed his team and absorbed even more abilities for himself. However, he was ultimately killed by the joined effort of Deadpool and Agent-X.

Gregory Terraerton was a normal human in Australia. He was experimented on and eventually transformed into a human cyborg via the Weapon X Program who dubbed him as “Slayback.” This program gave him superhuman strength and durability, a healing factor, telescopic arms.

He then went on many missions with fellow Weapon X members including Deadpool. Over the years, Deadpool got fed up with the sadism and sociopath of Skayback and blew him off. But he never knew that he has regenerative abilities.

Hence, within ten years Slayback fully recovered from Deadpool’s attack. Since then he became obsessed with revenge on Deadpool. Since then he has fought with Deadpool many a time but never succeeds. Allison Kemp also hired him to assassinate Deadpool.

Actor Ed Skrein appeared as Ajax in the first Deadpool movie. In the comics, Francis aka the Ajax was the assistant of Dr. Killebrew, who performed and tortured the rejected subject from the Weapon X Program. Wade Wilson was one of the subjects Ajax performed his tests on with Killebrew.

Wade was one of the few inmates that stood up to Francis. Which in turn gave other inmates some hope. For this Francis killed Wade’s friend named Wound Wade. He was also ordered to kill Wade but as I explained earlier, Deadpool’s healing factor became active and was revived.

He then encountered Francis and shot him multiple times from point-blank range. this chaos gave him a chance to escape. Francis was then revived under the Weapon X program by Killebrew, who transformed him into a cyborg now known as “Ajax.”

Since then Ajax has come across Deadpool on many occasions. He also recruited over a dozen armored soldiers to kill Weapon X escapees in the hope he would find Deadpool also. In their last battle, Deadpool finally snapped Ajax’s neck and killed him one and for all.

Dr. Whitby, a psychopath obsessed with mercenary Deadpool in the creator behind the Evil Deadpool. She stored Deadpool’s body parts and blood in her fridge. Deadpool once sneaked into her apartment and found out about this.

Shocked by this, Wade takes the body part and throws them into a dumpster. Somehow those body parts then heal and join together possibly due to his mutated cells creating Evil Deadpool. The first thing he does is kill the garbage men who are about to empty the dumpster.

Since then Evil Deadpool speared his reign of terror like hijacking an airplane to America and killing everyone on board including the pilots. He then crashed that plane onto a bridge. He has fought Deadpool on numerous occasions and most of the time result is a stalemate.

T-Ray is the archnemesis of Deadpool. If he is to be believed, T-Ray is the real Wade Wilson and Deadpool stole his identity by torturing him. On their first encounter, T-Ray used his magic on Deadpool, who was knocked into a coma and covered with snow for several days.

When Deadpool came back to his senses and on their next meeting T-Ray tells his story of the past that he was the real Wade Wilson. He explained how he and his wife Mercedes helped a wounded mercenary named Jack.

However, later, that man killed his wife and tortured him, and eventually took his identity. At first, Deadpool entirely believed him but then he laughed it off saying it doesn’t matter who he was in the past.

On the other hand, T-Ray has been consumed with hatred and became even worse than Deadpool ever was and how he resurrected his wife. This rivalry has been going on since then and they have come across each other on many occasions.

So guys that were brief info about the top 10 most evil villains Deadpool ever came across. Here is a quick summary for the same in a tabular form to quickly wrap things up:

So guys this was the complete list of top 10 villains Deadpool ever faced. Let me know if I missed any which you think should be on the list. Also, do share in the comment section who is your favorite villain and who would you like to see in the next Deadpool movie which will be set in the MCU.