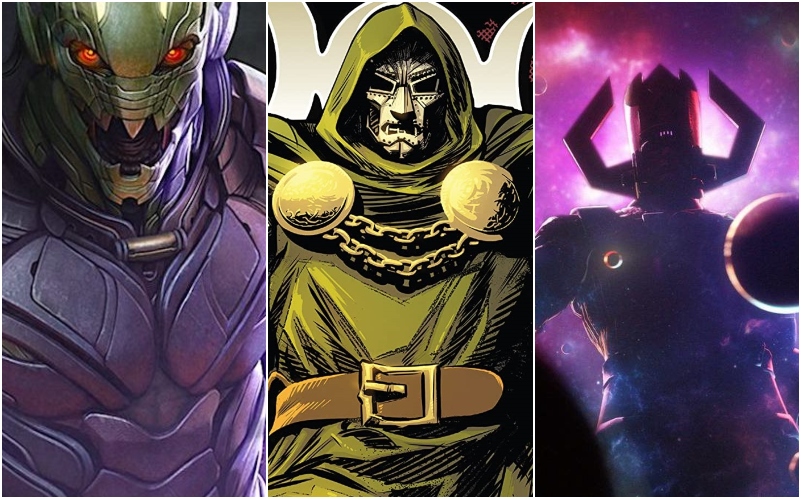 Today we’re gonna talk about the top villains of Marvel’s first family, the Fantastic Four. While everyone knows about the infamous Dr. Doom. This list just doesn’t stop there.

From the surface world to the undersea kingdom to the cosmic world to the negative zone they’ve faced a lot of enemies. This list explores the top 10 villains they ever faced. So let’s get started:

Here is a quick summary of the top 10 Fantastic Four Villains along with their abilities in a tabular form:

As you can see this was a short and precise summary of these characters. If you wanna read more about them, then proceed to the next section where we’ll discuss these characters in more detail.

Here I will share some information about these Fantastic Four Villains. We’ll discuss all these characters in a little bit more detail. So without any further delay, let’s get started:

Phillip Masters aka The Puppet Master can control people in real life by making their puppets with radioactive clay. Legend has it that he has some sort of psionic ability that enables him to do this. He is one of the oldest foes of the Fantastic Four.

Phillip is the stepfather of Alice Masters, Benjamin Grimm’s (The Thing) romantic interest. Which is one of the main reasons for his deep hatred towards the Thing.

While his power might not be the most exciting when compared to other nemeses of Fantastic Four his personal connection earns him a spot on this list. He has come face to face with the F4 on many occasions but was never able to beat them. He once tried to take over the world but was thwarted in this effort by the Fantastic Four.

Namor the Sub-Mariner, one of the very first Marvel characters ever created. Popularly referred to as the first known comic book anti-hero. Being an anti-hero, he has worked directly with the Fantastic Four, Avengers, the Fantastic Four, the X-Men, and many more teams but also had fought against them as well on many occasions.

He is also the first known mutant from the Marvel Universe. With the help of his aquatic adaptation and harnessing the power of the aquatic life he has launched many attacks upon the surface world from his undersea Atlantic kingdom.

If it wasn’t for Namor’s romantic interest in Sue (Invisible Woman) things could have gotten even worse. Namor has kidnapped Sue a couple of times and since then it has become another personal matter. The FF and Namor have faced each other a lot of times but the Fantastic Four have thwarted him on many occasions.

Psycho-Man is the leader of a technocracy that governs a microscopic system of worlds in the Microverse (or the Quantum Realm in the MCU). Due to his connections to the negative zone, he has come face-to-face with the Fantastic Four on many occasions.

Psycho-Man has a genius-level of intellect and he uses powered armor along with a futuristic space vessel. He can control and manipulate the emotions of other beings with an emotion-controlling device. He often used that device to bring out Sue Storm’s Malice personality.

His many attempts of conquering the world have been thwarted by the combined efforts of the Fantastic Four, the Black Panther, and the Inhuman royal family.

The Frightful Four serves as the antithesis / the evil counterparts to the Fantastic Four. This team is masterminded by the Wingless Wizard who has recruited sociopaths like him. The original lineup consisted of the Wizard, the Sandman, the Trapster, and the Medusa of the Inhumans.

However, later they rarely succeed as they lacked the family element. There were also other members at times in this team. One being with The Brute, an evil Reed Richards from a different Earth. And because of that, he became a personal problem for the Fantastic Four.

Harvey Rupert Elder aka the Mole Man formerly was an American explorer and nuclear engineer. Due to the combination of Elder’s abrasive personality and his homely dwarfish appearance he was often socially shunned.

He suffered permanent damage to his eyes when he gazed upon a highly reflective deposit of diamonds that he found in the underground realm of Subterrane. Forever stuck in this realm Elder then decided to explore his new world.

He eventually became Mole Man the ruler of the branch of Subterraneans now known as the Moloids. Mole Man decided to take over the surface world who rejected him with the use of the Deviant-derived creatures and technology that he found in the Subterranea realm.

MCU fans already know about Ronan from the Guardians of the Galaxy Vol. 1 and Captain Marvel. He was born on the planet Hala. Ronan later joined the Accuser Corps, who are the Kree equivalent of military governors and jurists, and his rise through their ranks was extraordinary. As he eventually became the third-most powerful being in the Kree Empire.

The Supreme Intelligence ultimately appointed him “Supreme Accuser of the Kree Empire”. Now, he is simply known as “Ronan the Accuser”. He was sent to Earth on his first mission to investigate the destruction of a robotic Kree Sentry at the hands of the Fantastic Four.

However, the team didn’t find any difficulty in defeating him which then resulted in a Kree expedition to spy on and assess Earth. He is one of the major adversaries of superhero teams such as the Fantastic Four, the Avengers, and the Guardians of the Galaxy.

While the entire Skrull empire spans across numerous galaxies and surrounds countless worlds their love for conquering the Earth never faded away. Skrull emperor Dorrek VII created a Skrull warrior Kl’rt known as Super-Skrull to defeat the Fantastic Four team as they thwarted the Empire’s invasion of Earth.

Dorrek gave warrior Kl’rt, the combined abilities of all the Fantastic Four. Because of this Kl’rt was stronger than the Thing and had a superior flight and greater pyrokinetic ability than the Human Torch. He had better control of invisibility and force fields than the Invisible Woman and could stretch further than Mr. Fantastic.

On top of that, he still retained his shapeshifting and hypnotic abilities. He was sent to Earth by Dorrek to defeat the Fantastic Four and pave the way for a new Skrull Empire invasion.

Annihilus is the ruler of the Negative Zone. He controls the inhabitants of the negative zone via his powerful Cosmic Control Rod. He first came to know about Fantastic Four when Reed Richards found out the way to travel to the Negative Zone from Earth. Which then leads to their first encounter.

Minions of Annihilus minions captured the heroes, but they escaped along with stealing Annihilus’ Control Rod. They returned it after siphoning off the needed anti-particles and returned to Earth

I have also talked about him where we discussed a theory on how Fantastic Four can join the MCU. Check that out as well because that’s the best way to bring them to the MCU.

Galactus is a cosmic entity that consumes planets to sustain its life force. He is the sole survivor of the previous Big Bang. He has been cursed to stride the spaceways, looking for worlds to consume.

But the catch is his hunger is eternal and can never be satisfied. Galactus was created by Stan Lee and Kirby when they decided to move away from the typical idea of a villain.

He was first introduced as a god-like figure who feeds by draining living planets of their energy and operates without regard to the morality and judgments of mortal beings. He has threatened to consume Earth on many occasions but stopped at the last possible minute.

As he has taken members from the F4 and turned them into his herald, smaller cosmic beings that scour for worlds to eat and announce Galactus’ arrival. Once Frankie Raye, Johnny Storm’s girlfriend, willingly went with Galactus and became Nova, an amoral, cosmic fire-powered herald that discovered many suitable worlds for Galactus.

Doctor Victor Von Doom aka the Dr. Doom is the greatest enemy of the Fantastic Four and one of the greatest villains of the entire Marvel universe. He is a genius scientist with a love for technology and magic.

But his lust for power has brought him up against the Fantastic Four on many occasions. Victor and Reed were college roommates. Once Reed pointed out a flaw in the dangerous experiment doom was conducting but he ignored his warning.

The experiment then resulted in blowing up in Victor’s face that gave him his infamous mask to hide his scar. Doom blamed Reed for this incident and vowed to take him out. Thankfully, he hasn’t yet succeeded in doing so yet.

So guys this was the complete list of the top 10 best villains of the Fantastic Four team. If you think I missed any big villains please let me know in the comment section below.

Also, don’t forget to tell us about your favorite villain and which one would you love to see in the inevitable Fantastic Four MCU movie.