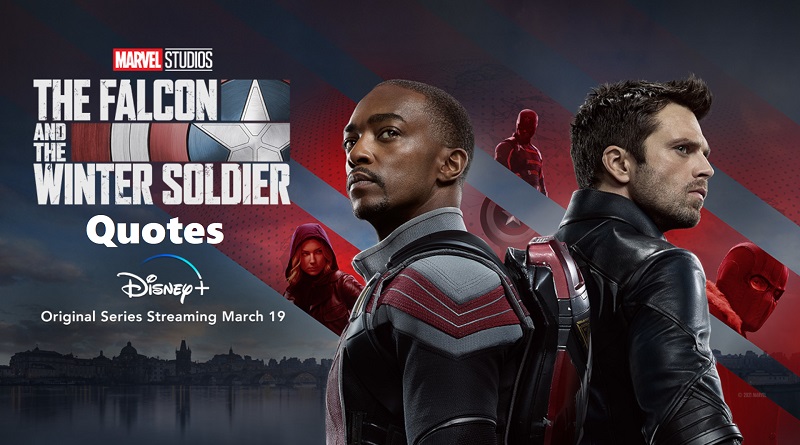 The Falcon and the Winter soldier starts with a bang and right away it feels like a Marvel Project. Especially after WandaVision which was pretty unique from what Marvel has ever done. But that doesn’t stop this show to explore the depths of the characters.

With The Falcon and The Winter Soldier show now exploring the emotions and background of what superheroes deal with it gives us pretty awesome quotes that elevate the portrayal of these emotions even more.

Especially the dynamic between Sam and Bucky. With that let’s dive into the Amazing quotes we got from The Falcon and The Winter Soldier:

1. Sam Wilson: Steve represented the best in all of us. Courageous, righteous, hopeful. And he mastered posing stoically. The world has been forever changed. A few months ago, billions of people reappeared after five years away, sending the world into turmoil. We need new heroes. Ones suited for the times we’re in. Symbols… are nothing without the women and men that give them meaning, and this thing… I don’t know if there’s ever been a greater symbol, but it’s more about the man who propped it up, and he’s gone. So, today we honor Steve’s legacy, but also, we look to the future. So, thank you, Captain America, but this belongs to you.

3. James Rhodes: The world’s broken. Everyone’s just looking for someone to fix it.

4. Joaquin Torres: They’re called the Flag Smashers.
Sam Wilson: Is that a new thing? Bad guys give themselves bad names.
Joaquin Torres: There’s a lot worse names than that one. But basically, they think that the world was better during the Blip. Trust me, it wasn’t.

6. Sam Wilson: Trust me. Every time something gets better for one group, it gets bad for another.

7. Bucky Barnes: This is new for me. okay? I didn’t have a moment to deal with anything. I only had a little calm in Wakanda. And other than that, I just went from one fight to another for 90 years.

Check out: The Best Quotes from WandaVision

9. Sam Wilson: A sorcerer is a wizard without a hat. Think about it, right? I’m right. I just came up with it, it’s great.

10. Sam Wilson: Look at you. All stealthy. A little time in Wakanda and you come out White Panther.
Bucky Barnes: It’s actually White Wolf.

11. Bucky Barnes: You ever jump on top of a grenade?

13. Isaiah Bradley: I just wanted to see if he got the arm back. Or if he’d come to kill me.
Bucky Barnes: I’m not a killer anymore.
Isaiah Bradley: You think you can wake up one day and decide who you wanna be? It doesn’t work like that.

15. Falcon: I told him about Trouble Man. He wrote it in that book. Did you hear? What’d you think?
Bucky: I like ’40s music, so…
Falcon: You didn’t like it?
Bucky: I like it.
Zemo: It is a masterpiece, James. Complete. Comprehensive. It captures the African-American experience.
Falcon: He’s out of line, but he’s right. It’s great everybody loves Marvin Gaye.

Now, who can forget this iconic line? Which inspired my memes and quickly became a trend. Check out the best memes from “He’s out of line but he’s right” quote.

16. Baron Zemo: You must have really looked up to Steve. But I realized something when I met him. The danger with people like him, America’s Super Soldiers, is that we put them on pedestals.
Sam Wilson: Watch your step, Zemo.
Baron Zemo: They become symbols. Icons. And then we start to forget about their flaws. From there, cities fly, innocent people die, movements are formed, wars are fought.
Baron Zemo: (to Barnes) You remember that, right? As a young soldier sent to Germany to stop a mad icon. Do we want to live in a world full of people like the Red Skull?

17. Sam Wilson: I assume you’re not gonna move your seat up.
Bucky Barnes: No.

21. “The desire to become a superhuman cannot be separated from supremacist ideals. Anyone with that serum is inherently on that path.” — Baron Zemo

22. “You gotta stop looking to other people to tell you who you are.” — Sam Wilson

Checkout: Top Quotes from What if…? TV Series

25. “Start lining up our buyers. Super Soldiers might be off the menu, but we’re about to have full access to government secrets, prototype weapons, you name it. Should be something for everyone.” — Sharon Carter aka The Power Broker

So guys that’s a wrap for this article. These were some of the best quotes from the falcon and the winter soldier show, please let me know which one is your favorite.

Overall, I liked the show but I have mixed opinions about this, so I would just say that it could’ve been much better. Anyways please do tell me, what do you think about the show.