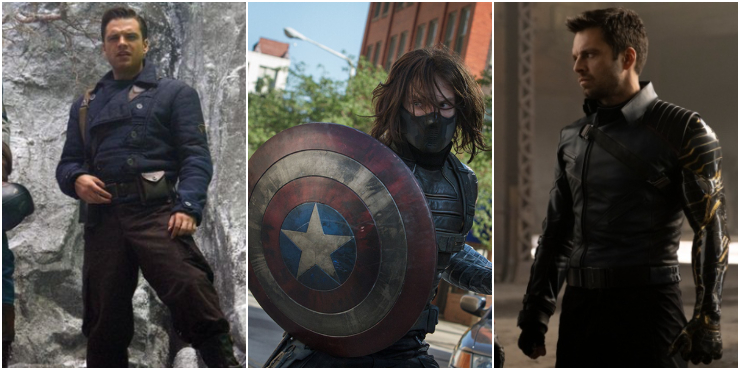 Winter Soldier is back with The Falcon and The Winter Soldier series. And here I’m today with looking back at the best quotes of Bucky Barnes from his MCU Journey till now.

We all loved Sebastian Stan’s portrayal of the character. I mean how can someone forget the Winter Soldier appearance from Captain America: The Winter Soldier movie. He instantly became the favorites of many.

Not that he wasn’t popular already as he was already known to be one of the best anti-heroes from Marvel, but seeing that transition from page to screen was a delight to many. So without any further delay let’s get started with this article:

1. Steve Rogers: Where are we going?
Bucky Barnes: The future.

3. Steve Rogers: I should be going with you. Look, I know you don’t think I can do this.
James Barnes: This isn’t a back alley, Steve. It’s war!

4. Bucky Barnes: Don’t do anything stupid until I come back.
Steve Rogers: How can I? You’re taking all the stupid with you.

6. James Barnes: What happened to you?
Steve Rogers: I joined the Army.

8. (to steve, after seeing Schmidt’s face behind the mask)
“You don’t have one of those, do you?” — Bucky Barnes

10. Steve Rogers: You ready to follow Captain America into the jaws of death?
Bucky Barnes: Hell, no! The little guy from Brooklyn who was too dumb not to run away from a fight. I’m following him.

12. Steve Rogers: Bucky?
Winter Soldier: Who the hell is Bucky?

13. Bucky Barnes: Can you move your seat up?
Sam Wilson: No.

18. Bucky Barnes: I am not the only Winter Soldier.

Now let’s check out the best Quotes of James Buchanan from the Avengers Movies. Though, he only appeared in two Avengers movies i.e., Infinity War and Endgame. And even then he was only briefly in the Endgame.

19. T’Challa: This one may be tired of war, but the White Wolf has rested long enough.
Bucky Barnes: Where’s the fight?
T’Challa: On its way.

20. T’Challa: You will have my King’s Guard, the Border Tribe, the Dora Milaje, and…
Bucky Barnes: A semi-stable hundred-year-old man.
Steve Rogers: How’ve you been, Buck?
Bucky Barnes: Oh, not bad for the end of the world.

22. Steve Rogers: Don’t do anything stupid until I come back.
Bucky Barnes: How can I? You’re taking all the stupid with you.

Let’s see his quotes from Marvel’s Phase 4 and beyond. Although, right now we’ve only got him in the Disney+ TV series, The Falcon and The Winter Soldier.

But this list will be updated as we get more of him. I have already shared top quotes from The Falcon and The Winter Soldier show, make sure to check that out as well.

25. “This is new for me. okay? I didn’t have a moment to deal with anything. I only had a little calm in Wakanda. And other than that, I just went from one fight to another for 90 years.” — Bucky Barnes

26. Sam Wilson: Look at you. All stealthy. A little time in Wakanda and you come out White Panther.
Bucky Barnes: It’s actually White Wolf.

29. Sam Wilson: I assume you’re not gonna move your seat up.
Bucky Barnes: No.

So guys these were some of the Top quotes which I particularly think are amazing. This list will expand as Bucky continues his journey in the MCU phase 4 which he most definitely will.

As he is gonna be a member of Thunderbolts in the MCU. Anyways, hope you guys liked this article, feel free to share your thoughts in the comment section below.