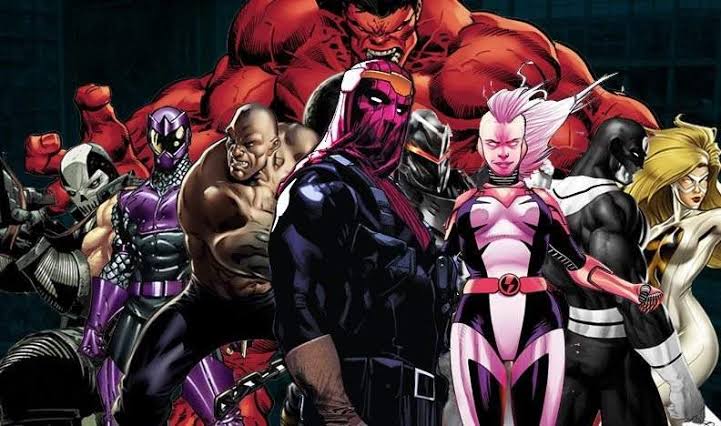 After Avengers: Endgame, the MCU is going to diversify a lot. Not to Mention, Doctor Strange 2 is going to explore the multiverse in the MCU. Soon Marvel is going to introduce Thunderbolts in the MCU.

Don’t worry if you don’t know what Thunderbolts is. That’s what I’m going to explain in this article. According to the latest reports, Marvel is setting up Thunderbolts. They are first going to be introduced in The Falcon and The Winter Soldier. So Let’s start with who Thunderbolts are.

Thunderbolts is a group or team of both superheroes and supervillains. Both heroes and villains work together toward good deeds. Although, the villains don’t do that on purpose. They’re given a choice to either help or face the consequences.

Yes, you got that right it’s more like Suicide Squad but includes the heroes as well. This is going to be pretty interesting seeing villains and heroes working together. Especially in the live-action version.

There has been a lot of Thunderbolts team. Made by different leaders. However, here we will only discuss the potential team that is pretty possible as of now. Because there are a lot of characters that aren’t even introduced in the MCU.

Here is the list of current Thunderbolts members who will be present in the upcoming series The Falcon and the Winter Soldier. Except for Taskmaster and Black Widow(Yelena Belova not Natasha Romanoff).

It’s been said that it’s General Thaddeus “Thunderbolt” Ross who will start this version of the Thunderbolts Team. After the introduction in Falcon and the Winter soldier, the whole team will move into a new Disney+ Series.

That will introduce more team members and some back story to those characters. The fact that Black Widow will introduce Taskmaster and Yelena to the MCU make this report even stronger.

Let’s discuss a little more about these characters:

Ross is a United States military officer, he was also the head of the Gamma Bomb Project that turned Banner into the Hulk. We all are already familiar with him. He is portrayed by William Hurt in the MCU.

In the Comics, Ross was hunting Banner. A similar experiment was also used on him so that he could fight with Hulk more effectively. We’ll have to see how he will be transformed into Red Hulk in the MCU,

We all know him from the Civil War. He is the one responsible for the broke up between our beloved Avengers team. Nonetheless, as much as I hate this character from a fan’s point of view. The more I love him from critics’ point.

Not to mention Marvel hasn’t produced a lot of great antagonists up until the Civil War. yes, there were good villains but Helmut J. Zemo outclassed all of them. He was a villain with a different vision rather than the one who just wants to rule among the people.

I’m glad he is going to return to the Falcon and the Winter Soldier series. This character/villain has a lot of potentials. Surprisingly enough, this time he is coming back with his comic-accurate mask. Sounds interesting, right.

Now, who doesn’t know about James Buchanan Barnes? A semi-stable 100-year-old soldier. As introduced by himself in infinity war. He has been through a lot of ups and downs. H.Y.D.R.A. used him as an assassin. He killed a lot of people including Tony Stark’s parents.

After his well-deserved rest in Wakanda, where H.Y.D.R.A.’s program was removed from his mind. Then fighting alongside Avengers against Thanos army. He has come a long way. Now, he is going to continue his journey with Falcon now turned Captain America, in the upcoming series The Falcon and The Winter Soldier.

I am really hyped for this show. Especially, to see the future of these two characters. This show will deal with the political side of the MCU rather than space magic or some Alien invasion.

As it’s been reported that the plot is based on the following: US Govt. is not going to accept a Black Captain America. So now they assign their own Captain and hunt for Falcon a.k.a. Sam Wilson.

Update: As I said US govt. will assign their own Captain America or US agent. Here is the first look at Wyatt Russell’s US Agent. We’ll have to see how Bucky will join the Thunderbolts team.

Taskmaster debuted in the MCU with Black Widow. And they gender-swapped him. Frankly speaking, he was ruined and it’s not even because of gender-swapping. I hope they bring some other or maybe a real version of him aka Anthony Master.

Because in comics, he’s a great villain who has some version of the Super-Soldier Serum. He is capable of copying any fighting style just by seeing them. However, there is one downside with his power, he loses previous memory as he copies new styles.

He could be a really great villain if he’s done right. I’m really excited to see him in action now. I hope that Marvel did justice to him. As from trailers, we can see that his mask has been changed.

As a matter of fact, it’s also reported that the taskmaster could be a woman in the MCU. But I really hope that Marvel doesn’t go that way and should respect the source material.

Black Widow or Yelena Belova is not to be confused with our beloved Natasha. We finally got her in the Black Widow movie. And while the movie was hit and miss for many. One thing that they absolutely nailed is the character of Yelena Belova.

Thanks to the amazing portrayal by Florence Pugh. And she’s also going to be in Hawkeye as we see Contessa Valentina Allegra de Fontaine giving her a job. This pretty much confirms that she is already working for Valentia.

We’ll see how and when we’re finally getting the Thunderbolts announcement. Because Valentina already recruited John Walker aka The U.S. Agent on screen. So it looks like this version of Thunderbolt will be made by Valentina herself.

So, we can’t say much about this character’s future. However, if Marvel is certainly going to introduce Thunderbolts in the MCU this will be the right moment.

Update: See I told you.

Let me know what do you think about this team and also comment who’s your favorite member from the Thunderbolts team irrespective of MCU or comics in the comment section below.