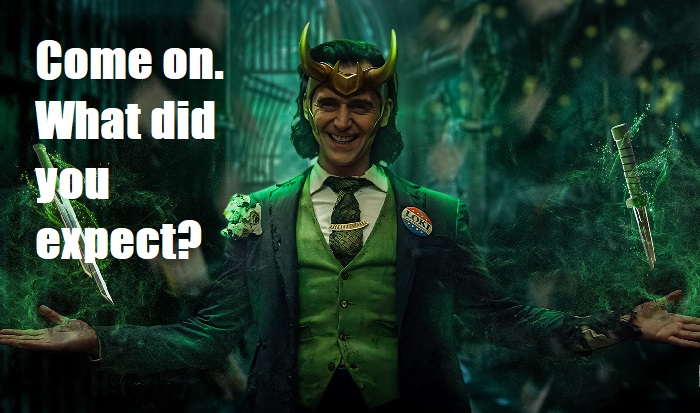 I am here with the glorious Quotes from the new Loki TV series. Loki became the 3rd series in the MCU TV series lineup as its first episode aired on 9th July. And Oh boy was it glorious.

Loki has the best pilot episode from all the MCU series till now. And it’s filled with the best quotes as you would expect. So, without wasting time let’s get started with the Top Quotes from the Loki series:

1. “I am Loki of Asgard, and I am burdened with glorious purpose.” — Loki

2. “It’s been a very long day, and I think I’ve had my fill of idiots in armored suits telling me what to do, so, if you don’t mind, this is actually your last chance.” — Loki

3. Loki: Hey, hey! Absolutely not! This is fine Asgardian leather!
Robot: Hold very still.
(the robot proceeds to vaporize all of Loki’s costume, leaving him naked)
Loki: Now, hang on just a minute!

5. Ravonna Renslayer: Next case, please. Laufeyson. Variant L, aka Loki Laufeyson, is charged with sequence violation 7-20-89. How do you plead?
Loki: (chuckles) Ma’am, a god doesn’t plead. This has been a very enjoyable pantomime, but I’d like to go home now.

6. Ravonna Renslayer: Are you guilty or not guilty, sir?
Loki: (scoffs) Guilty of being the God of Mischief? Yes. Guilty of finding all of this incredibly tedious? Yes. Guilty of a crime against the Sacred Timeline? Absolutely not, you have the wrong person.

9. “You ridiculous bureaucrats will not dictate how my story ends!” — Loki

10. Loki: I’m gonna burn this place to the ground!
Mobius M. Mobius: I’ll show you where my desk is. You can start there.

11. Loki: Are you taking me somewhere to kill me?
Mobius: No, that’s where you just were. I’m taking you someplace to talk.
Loki: I don’t like to talk.
Mobius: No, but you do like to lie, which you just did because we both know you love to talk.
(makes mouth movements with his hands)
Mobius: Talkie-talkie.

12. Loki: Trust is for children and dogs. There is only one person you can trust.
Mobius: Yourself? I like it. Slap it on a T-shirt.

14. “I know what this place is. It’s an illusion. It’s a cruel, elaborate trick conjured by the weak to inspire fear. A desperate attempt at control. Now, you all parade about as if you’re the divine arbiters of power in the universe.” — Loki

Check out: Top Quotes from The falcon and the Winter Soldier

15. “The first and most oppressive lie ever uttered was the song of freedom. For nearly every living thing, choice breeds shame and uncertainty, and regret. There’s a fork in every road, yet the wrong path always taken.” — Loki

16. “I am on the verge of acquiring everything I am owed. And when I do it will be because I did it. Not because it was supposed to happen. Honestly, you are pathetic. You are an irrelevance. A detour. A footnote to my ascent.” — Loki

17. “The Time-Keepers have built quite the circus, and I see the clowns are playing their paths to perfection.” — Loki

18. Mobius: It’s funny, for someone born to rule, you sure do lose a lot. You might even say it’s in your nature.
Loki: You know things didn’t turn out so well for the last person that said that to me.

19. “You weren’t born to be king, Loki. You were born to cause pain and suffering and death. That’s how it is, that’s how it was, that’s how it will be. (shows the Avengers one final time) All so that others can achieve the best versions of themselves.” — Mobius M. Mobius

20. (Having seen where his future will lead to)
Loki: I don’t enjoy hurting people. I… I don’t enjoy it. I do it because I’ve had to.
Mobius: Okay, explain that to me.
Loki: Because it’s part of the illusion. It’s the cruel, elaborate trick conjured by the weak to inspire fear.
Mobius: A desperate play for control. You do know yourself.
Loki: A villain.

21. Loki: I’d never stab anyone in the back. That’s such a boring form of betrayal.
Mobius: Loki, I’ve studied almost every moment of your entire life. You’ve literally stabbed people in the back, like, 50 times.
Loki: …. Well, I’d never do it again, because it got old.

Also Read: Best Quotes from What if? Series

22. If you think too hard about where any of us came from, who we truly are, it sounds kinda ridiculous. Existence is chaos. Nothing makes any sense, so we try to make some sense of it. — Mobius

24. Why is it the people you can’t trust are always saying “trust me”? — Mobius

26. Love is a dagger. It’s a weapon to be wielded far away or up close. You can see yourself in it. It’s beautiful. Until it makes you bleed. But ultimately, when you reach for it… It isn’t real. — Loki

28. Sylvie: Do you think what makes a Loki a Loki is the fact that we’re destined to lose?
Loki: No. We may lose, sometimes painfully, but we don’t die. We survive.

29. ” Look, it’s been a very, very, very trying past few days. Months? I don’t even know how long it’s been since New York. All I know is, I got pruned and I woke up here, and now I’m surrounded by Variants of myself, plus an alligator, which I’m heartbroken to report I didn’t even find all that strange!” — Loki

30. Classic Loki: [Referring to Alligator Loki] You really don’t remember him?
Mobius: I mean, the TVA arrested a lot of Lokis, but no, I don’t remember an alligator. I mean, who’s to say he’s even a Loki Variant?
Classic Loki: He is green, isn’t he?
Mobius: I don’t know, he could be lying. The long con. Of course, that just makes him more likely to be a Loki. It’s always the game within the game with you guys, which I respect.

31. Sylvie: How do I know that, in the final moments, you won’t betray me?
Loki: Listen, Sylvie, I… I betrayed everyone who ever loved me. I betrayed my father, my brother, my home. I know what I did. And I know why I did it. And that’s not who I am anymore.

32. I guess when you think the ends justify the means, there is not much you won’t do. — Mobius

33. Classic Loki: So, just like that, you’re turning on the very thing you devoted your life to
Mobius: Well, it’s never too late to change.

35. I think we’re stronger than we realize. — Loki

36. Sylvie: Why aren’t we seeing this the same way?
Loki: Because you can’t trust… and I can’t be trusted.

39. “Only one person gets free will. The one in charge.” — Ravonna Renslayer

So, guys, these were the best Quotes from Loki Show. I hope you enjoyed the list. This show was great and kickstart what is going to be the focus of the next phases of the MCU, aka the Multiverse.

Interestingly enough Loki has been renewed for Season 2 and it can’t come soon. Let me know what are your thoughts on the show in the comment section down below.