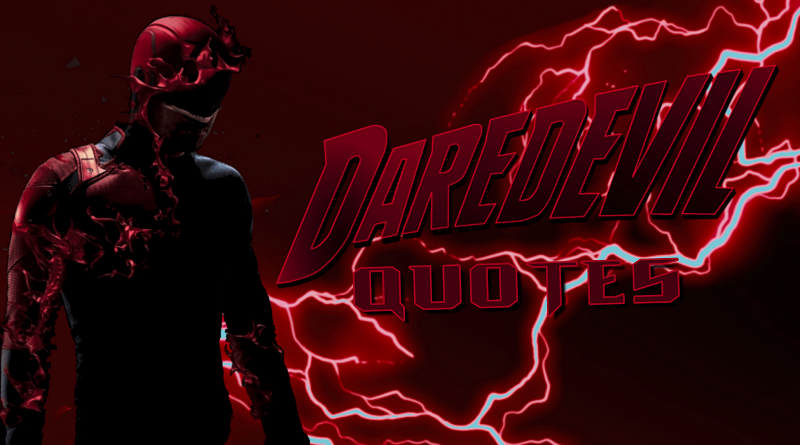 Matt Murdock, the Devil of Hell’s Kitchen aka The Man without fear. Daredevil is a show that is so close to the heart of all marvel fans. The quotes, music, tone, action, and everything are just so different about Daredevil which makes it stand out from the rest of the MCU.

This show instantly became a favorite among marvel cinema fans when Netflix adapted the character and released a TV show on 10 April 2015. And for the comics fans, it was a dream come true, to witness one of their favorite characters get his series.

It is now regarded as one of the best superhero shows of all time if not the best. Unfortunately, the deal between Netflix and Disney broke and it was us, fans who suffered the most. Daredevil and the rest of the other Netflix Marvel show got canceled.

With that being said, here I am with the best quotes from Netflix’s Daredevil show which will remain with us forever. So let’s get started:

1. “I’m not seeking penance for what I’ve done, father. I’m asking for forgiveness… For what I’m about to do.” — Matt Murdock (Daredevil)

2. “Sometimes even when you get knocked down, you can still win.” — Jack Murdock

4. “They say the past is etched in stone, but it isn’t. It’s smoke trapped in a closed room, swirling, changing, buffeted by the passing of years, and wishful thinking. But even though our perception of it changes, one thing remains constant: the past can never be completely erased, it lingers like the scent of burning wood.” — James Wesely

5. “A woman that can be bought isn’t worth having.” — Wilson Fisk

6. “These questions of good and evil… Have no place in a court of law. Only the facts matter.” — Matt Murdock (Daredevil)

7. “A world on fire.” – Matt Murdock (Daredevil) to Claire when she asks “Okay, but what does that look like? Like, what do you actually see?”

8. “I’m not trying to be a hero. I’m just a guy that got fed up with men like you and I decided to do something about it.” — Matt Murdock (Daredevil)

10. “Problems are just opportunities that haven’t presented themselves.” — Wilson Fisk

11. “Smart don’t come out of books, kid. Smart is making the right decision at the right time. Like now. What’s it gonna be, Matty? Are you gonna spend your life crying and rocking yourself to sleep at night? Or are you gonna dig deep and find out what it takes to reshuffle those cards life dealt you? Your call.” — Stick

12. “There are no heroes, no villains. Just people with different agendas.” — Ben Urich

13. “Wind blows the hardest the closer you get to the mountain top.” — Leland Owlsley

14. “Yeah. Daredevil kicks ass, this whole city cheers like we just won the World Series. But this guy? He does it, and the streets get bloody. Makes everybody stop and think twice about the whole “hero” proposition.” — Sgt. Brett Mahoney

15. “There’s something about this city that makes good people want to shoot their way out of bad situations.” — Karen Page

18. “Somebody ask you to put on that costume or you take it upon yourself? You know what I think of you, hero? I think you’re a half-measure. I think you’re a man who can’t finish the job. I think that you’re a coward. You know the one thing that you just can’t see? You know you’re one bad day away from being me.” — Frank Castle (Punisher)

19. “You act like it’s a playground. You beat up the bullies with your fists. You throw ’em in jail, everybody calls you a hero, right? And then a month, a week, a day later, they’re back on the streets doing the same goddamn thing!” — Frank Castle (Punisher)

21. “You run around this city in a pair of little boy’s pajamas and a mask. You go home at night, right? Take that mask off, maybe you think it wasn’t you who did those things, maybe it was somebody else. Well, see, soldiers we don’t wear masks, yeah? We don’t get that privilege.” — Frank Castle (Punisher)

22. “In each of us there is a world, webbing out, reaching others. Creating reactions. Sometimes equal, sometimes opposite.” — Father Lantom

24. “You see, unlike you other adversaries, Mr. Fisk, I can break you without breaking a single law.” — Matt Murdock (Daredevil)

26. “Good men died tonight. You will make their sacrifice worth something. Or you can shove our deal up your ass.” — Ray Nadeem

27. “When someone in need tries to push you away you have to find the strength to hold on tighter.” — Sister Maggie

28. “My years on this earth has taught me… there is nothing more important than love. I didn’t have much of it. And when it was offered to me, I was too afraid to accept it.” — Esther Falb

29. “We’re all broken. The point is that you find a person who’s broken pieces fit with yours.” — Vanessa Marianna

30. “You don’t get to destroy who I am, you will go back to prison, and you will live the rest of your miserable life in a cage knowing you’ll never have Vanessa, that this city rejected you, IT BEAT YOU! I BEAT YOU!” — Matt Murdock (Daredevil)

Must Read: What if…? Marvel Quotes

So, guys, these were some quotes from Daredevil show which I found to be the best and most powerful. Let’s me know what are you thought about these and what’s your favorite one in the comment section below.