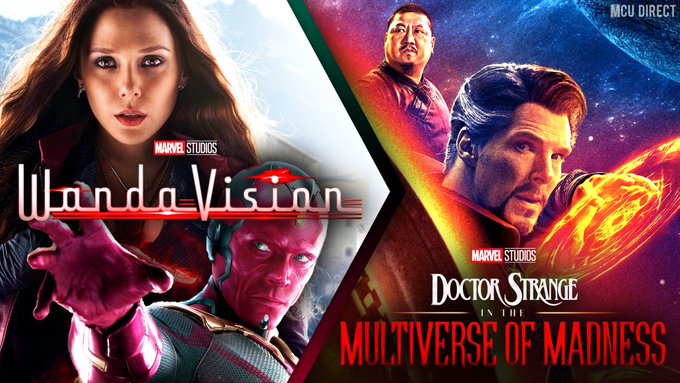 Marvel Studios announced a lot of Disney Plus series at SDCC. WandaVision was one of them. Perhaps the most anticipated TV series in all of the Phase TV shows announced. Today, we’re gonna discuss potential Plot for WandaVision which is based on comics.

Plot: WandaVision will explain why Wanda is called Scarlet witch. It will show her darker side. Wanda will discover her reality-warping powers. She will then manipulate reality, which will lead to many chaoses. Wanda will be portrayed as a Villain.

However, fans are really confused about why Vision is even in the title? Isn’t vision dead? If you’re one of them then you are in the right place. We will explain everything about WandaVision. So let’s get straight into this.

First of all, have a look at the cast of this show. Note: This only includes major cast

One thing that comes in mind after hearing the “WandaVision” title is that vision was dead in Infinity War. Last we saw him he was in this position :

So how is he going to return? Let’s get straight into this:

So there can be a lot of ways to bring Vision. Here we will explain how he can be brought back to life :

Before we jump on to the Reality warping Power of Scarlet Witch. Just have a look at original Poster Marvel Studios unveiled at the SDCC.

In this concept art/poster we can see that both Wanda and Vision are enjoying their life. However, if you notice then you could see that this appears early years. Perhaps this will be set in the 1970s or something close to that.

Also, notice their shadows, Vision’s appears to be having a Mind stone while Wanda’s appears different. Now here is our first clue which suggests that we will see Wanda’s evil avatar. This shadow is similar to her comic version.

Now we will discuss every possibility of how this show could be set in the 1970s. Because we already know WandaVision is set after the events of Avengers: Endgame.

Wanda Maximoff was devastated after Infinity War. She had already lost her brother QuickSilver before and in Infinity War she lost her love Vision. Yeah, so what if it’s just a robot. After all, love is love and love is blind.

In fact, Vision was no more just a robot he was evolving like a human as explained by Tony Stark. So Wanda just lost everything she had. Now she is distraught

However, this can lead to a lot of problems. Like other realities threats like Dormammu, Nightmare will find this as a golden opportunity to make chaoses in people’s life.

So the question arises, how this is going to be solved. As soon as you think about it the answer first comes in the mind is Doctor Strange. Who else can solve this problem better than the Sorceror Supreme/Master of the Mystic Arts a.k.a. Doctor Strange.

We’ll explain how this connection will be made later in this article. So before that let’s discuss how WandaVision will give direction to Marvel phase 4. I think Marvel Phase 4 or maybe 5 will be all about Multiverse.

Update: Marvel released the Super Bowl ad “Big Game” spot on Feb 3. We’ve got a lot of footage for WandaVision from that trailer.

But most important was this exact frame. We saw her pregnant and then this, here we can see two cribs. Means that’s probably Wiccan and Speed. So this strengthens this theory. Wanda is going to create her children with her magic.

WandaVision could introduce Fantastic 4 and X-men in the MCU

So as Wanda creates her own reality, what happens now? Marvel is really planning to bring X-Men and Fantastic 4 in the MCU. Thanks to the Disney-Fox merger. So they are still figuring how to introduce mutants in the MCU such that it doesn’t break the continuity.

According to me, the multiverse is the key to introduce X-men and F4 in the MCU. And there is no better way to do this with WandaVision or Doctor Strange in the Multiverse of Madness.

As we have seen in Far From Home that Mysterio explains he got snapped to a whole new dimension. However, he lied about it but Wanda can actually bring them from Different Dimension unintentionally.

Maybe Marvel will introduce X-men with WandaVision in the MCU. And for Fantastic Four they can go for other routes.

In fact, Peyton Reed the director of Ant-Man already has a great script for introducing Fantastic Four in the MCU. You can also have a look at that script. This can be an alternate way to introduce F4.

We have already suggested how this WandaVision Plot connects directly to Doctor Strange 2. This also confirms what the director of Doctor Strange said.

So here we will discuss how actually this Wanda Vision theory will lead to the Doctor Strange in Multiverse of Madness.

Nightmare is rumored to be the main Villain of Doctor Strange 2. We have already discussed him. You might wanna check that out. He is the ruler of the Dream Dimension. He captures people in their dreams.

So this WandaVision plot explains why Wanda is called Scarlet Witch. We will see the darker side of Wanda. This TV show might introduce mutants in the MCU. Also, this series will directly lead to Doctor Strange 2.

However, you should take all this Plot with a grain of salt. But what I think is this is going to be true not 100% but at least 60%. So let me know what do you think about this theory or if you have a better one share that in the comment section below.